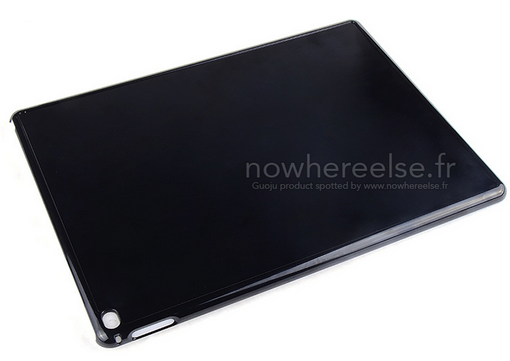 As we already found out through some rumors arrived on the web since last year, Apple plans that in 2015 to launch a large tablet, more precisely a device called iPad Air Plus / iPad Pro. After this series of leaks, we started to see a couple of pictures with its body elements, and cases developed for this model.

Today we get the chance to take a look on a couple of new live pictures with a case designed for iPad Air Plus, accessory that is revealed by nowhereelse.fr. As we can see, this case is pretty similar to the iPad Air one, the differences being represented by the outputs for those four stereo speakers that will be found on the 12+ inch slate.

In the same time, there’s a new information about the fact that iPad’s Air Plus screen will have a size between 12.2 and 12.9 inch. This tablet could bring in the package a dedicated stylus too, being a model designed more for the business enviroment. It remains to see what any other leaks are going to show next.