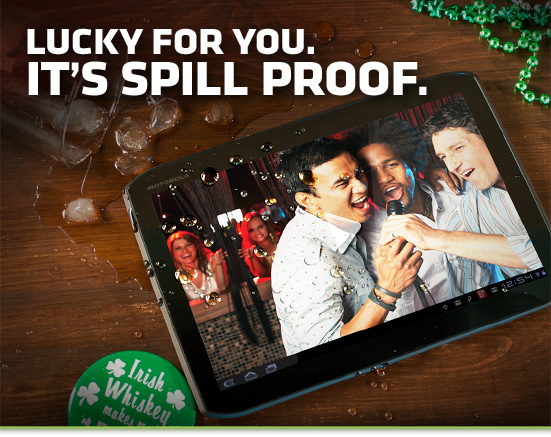 Having tested one of the Xyboards from Motorola, I already know that these tablets are… kind of waterproof. As mentioned in our review, their components are coated against splashes and similar damages. Now Motorola went all out and unveiled completely waterproofed versions of the Xyboard slates. The specs are the same, but now you can take a bath with your 10.1 inch tablet.

As shown in the poster below, the product is promoted with Saint Patrick’s day behind it, so it’s connected to all that whiskey and beer spilling that takes place these days. Adding the fact that at the front we have Gorilla Glass displays, this would make the Motorola Xyboard tablets pretty tough, against liquids and scratches, right? LTE is not included, though, so you may prefer the new iPad, complete with its incredible 9 hours of functioning on 4G.

In case you didn’t get the catch, know that the waterproofed Xyboard are only the WiFi versions of the tablet. Of course, resilient to spills doesn’t mean you can sink the tablet in the pool for days and expect it to work. However a casual drop won’t kill it, unlike any other major slate….