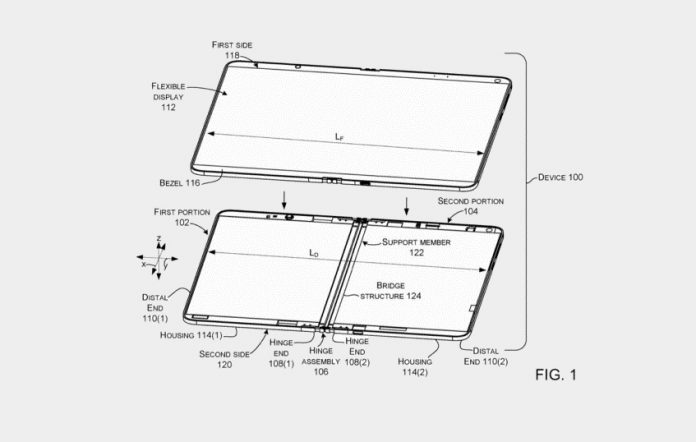 Microsoft keeps on patenting new dual screen devices, also foldable and flexible ones. The latest such model is a “Hinge Device” with a flexible display, that follows up on the Surface Duo and Surface Neo announced last year.

Those are yet to be launched and should come in late 2020, maybe even around Christmas time. Surface Duo comes with two 5.6 inch screens connected with a 360 degree hinge. The device is described as having a “first and second portion”, with the flexible screen covering both. Trying to make the unit less flimsy, Microsoft developed a cord which changes length in relation to the flexible display. The first and second portions will rotate relative to the hinge axis, while the cord offers underlying support.

In order to accommodate the flexible display, the length of the device underlying the display can be decreased by forcing the hinge guides towards the hinge assembly. As usual, a patent doesn’t mean that the device is actually going to become real, so we take it all with a big grain of salt. The device also has a special cam, designed to force support away from the hinge axis. Microsoft has been patenting foldables for a while now, but we’ll take them more seriously once the first models are out.

More information about future and present dual screen devices is expected to be unveiled during the Microsoft 365 Developer Day on Tuesday, February 11th.