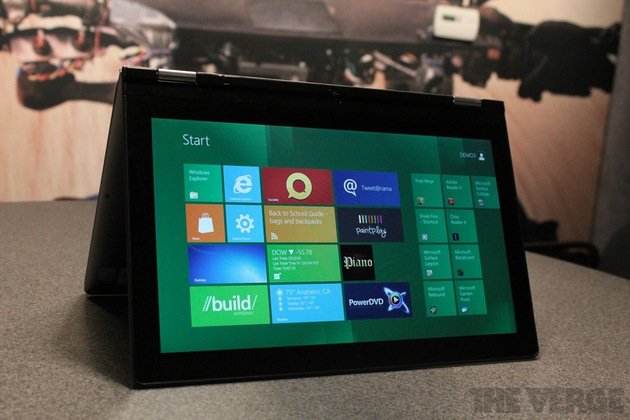 Although Michael Dell recently promised that the company he runs will offer an enterprise slate the day Windows 8 ships to customers, Lenovo’s also bragging about being the first to ship a tablet with this OS now. The company seems pretty sure that they’ll launch a Windows 8 tablet in October and they supposed that the new OS will also come then.

No details were provided about the device, except for the fact that it will use an Intel chip and there’s one machine that comes to mind here. I’m talking about the 13.3 inch Lenovo IdeaPad Yoga unit shown at CES 2012. That one has an attached keyboard and a 360 degree hinge that allows the user to flip the tablet into a laptop configuration. Dell and Lenovo aren’t the only companies that are making Windows 8 tablets, since HP, Nokia, ASUS and a couple of other biggies are also working on similar products.

I must mention that according to latest info, any device capable of running Windows 7 will also be able to run Windows 8, as long as it supports 5 touchpoints and has a bunch of varied sensors. Of course, some hardware buttons according to the Microsoft requirements are needed, but you get the idea.