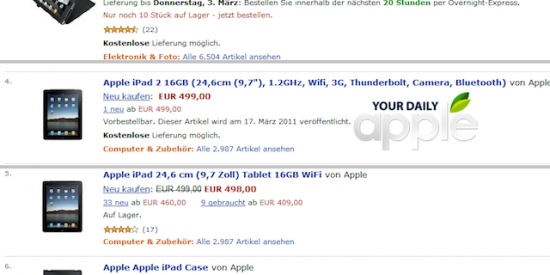 The big day of the iPad 2 announcement has come and we’re hours from the official Apple event. However, leaks keep pouring in, with the most recent one coming from Amazon Germany, where the new tablet was spotted. Supposedly, the new device comes with a 9.7 inch display, 16GB of storage and a 1.2GHz CPU.

WiFi, Bluetooth and 3G are also supported on the device, as well as a Thunderbolt connection and there’s a camera on the slate’s specs list, too. The price is listed as 499 euros and the availability is mentioned for March 17, matching the rumors that say the iPad 2 will hit the stores pretty soon after today’s announcement.

We’ll see in a couple of hours if these rumors are true or not and if you want to go searching for the iPad 2 on Amazon Germany, give it up, since the product is no longer listed.