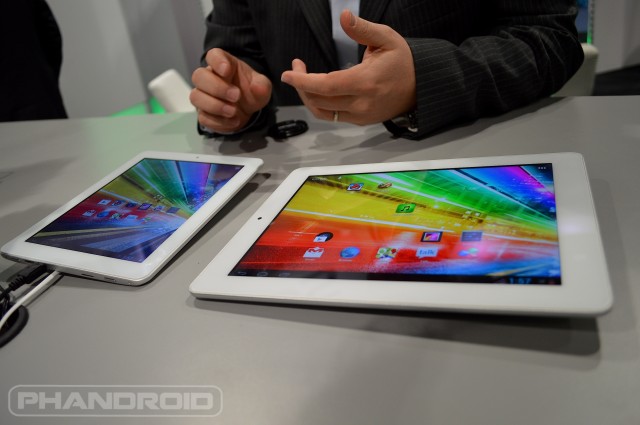 Announced earlier this week at CES 2013, these two new Archos tablets, Archos 97 Titanium HD and 80 Titanium were recently handled, as shown in the clip below. This is a hands on experience showcasing the devices, that are actually pretty well priced, since they cost $170 and $250 and even have some high end specs.

Both slates have aluminum cases and apparently the Archos representatives called them the “Platinum” line. The Archos 97 Platinum HD tablet was the more impressive model, with a 4:3 form factor that’s very hand-friendly and a 2048 x 1536 Super IPS screen that also impressed everyone. Both models feature quad core processors with Mali graphics, 2 GB of RAM and 2 megapixel cameras. Everything moved great on the slates, say the people who played with them and Android 4.1 Jelly Bean is the OS of choice here, in case you’re wondering.

There’s a wide range of ports available, including micro USB adn HDMI, plus memory expansion slots. Other models available for playing with were the Archos 70 and 101 Titanium, that well less impressive, especially because the Android experience was dumbed down by a dual core Rockchip CPU.

Global Tablet Market Drops 8% in 2015, According to Strategy Analytics;...