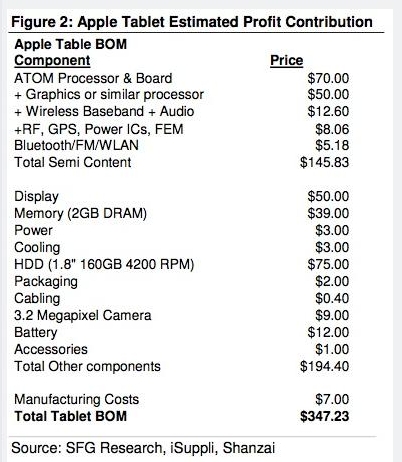 We’re a bit more than 2 weeks away from the supposed debut of the Apple Tablet, during the event scheduled by the Cupertino company on January 27th. Leaks are pouring in from everywhere and this time we’re being treated to a tablet showing the costs of the components incorporated by Apple’s new device.

According to analyst Jeffredy Fidacaro, Apple will spend around $340 for each iSlate model, if that’s the final name of the product. These are mere rumours, but we notice that the 1.8 inch 160GB HDD is the most expensive on the list, going for $75. The ATOM processor and board are next, with a $70 price tag, followed by the display, that costs $50 (as much as the graphics or similar processor, on the list).

The 2GB DRAM memory will cost $39, while the manufacturing is a mere $7. Considering that Apple plans to sell the tablet for $800 – $1000, they’ll be making quite a profit out of the new gizmo, don’t you think?