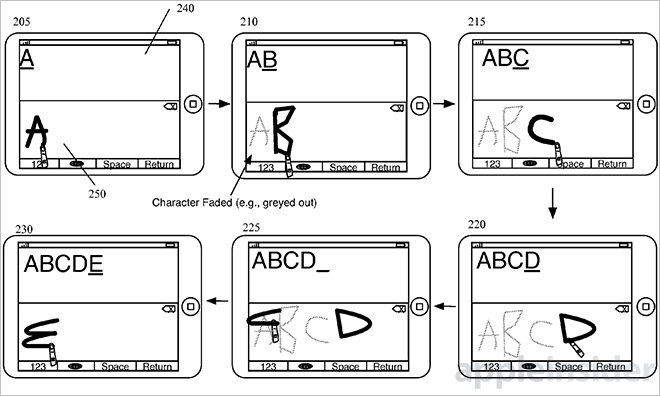 A bunch of Apple patent filings published this week reveal a few interesting products and accessories that the Cupertino giant has been working on. For example they’ve been developing an intuitive continuous handwriting recognition system, as well as earphones that snap together magnetically.

The Apple Continuous Handwriting UI patent is published by the US Patent and Trademark Office, detailing a new type of handwriting recognition and input, custom built for students and the corporate environment. The current experience is not very intuitive and it involves limited language-centric tools built into iOS. The patent details a designated handwriting input area that allows the user to continuously handwrite without stopping.

Up until now people usually wrote one letter at a time for better recognition. Now the experience will mimic the pen and paper one even better. With this system, the device will automatically recognize and clear handwriting dynamically. The patents also detail virtual keys used for character deletion, redisplay and other input requirements. Apple claims that a finger or stylus can be used as input device, meaning they’re most likely working on a stylus.

Then there’s the headphone patent, dubbed “Earphones with left/right magnetic asymmetry”. Aside from the magnetic joint thingie, there will be touch sensors on board to determine when the buds are in contact.