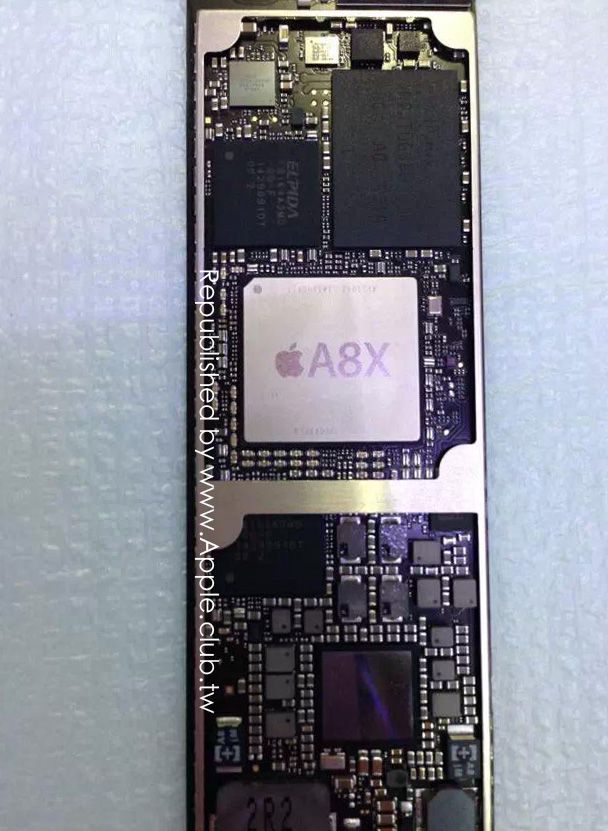 With just a few days left until the Apple event where we’re going to see a couple of new attractive products like new iPads, new Macbooks and the OS X Yosemite update, today we found out more about iPad Air 2 and its hardware. Even if around the web there was a rumor about the fact that iPad Air 2 will bring 2 GB of RAM, now through a photo revealed by the guys from apple.club.tw, the 2 GB RAM memory chip is confirmed to arrive on this device.

As you can see in the photo, there’s a 2 GB RAM memory chip developed by ELPIDA, followed below by the new Apple A8X processor that will be an upgraded version of the A8 chip that is currently found on both the iPhone 6 and the iPhone 6 Plus. In terms of design, the new iPad Air will be pretty much similar as its sibling, but we’ll get a thinner and slimmer case now.

Among other features that we’ll get on the iPad Air 2 we also have a fingerprint TouchID scanner that may be used for Apple Pay in case the tablet will also offer NFC technology. The Apple event is set for October 16, a day when we’ll see how the new iPad Air will look like and how much it will cost.