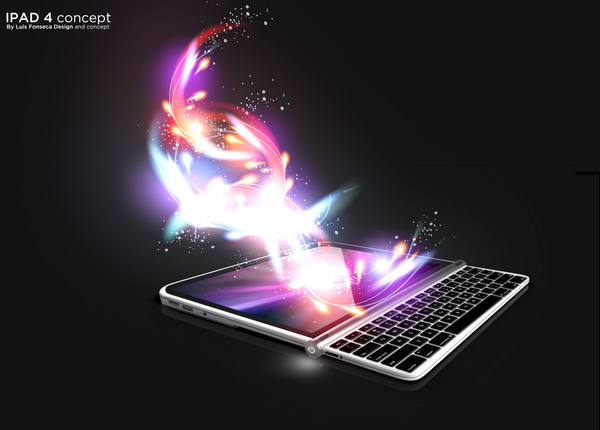 The iPad 3 is barely out two months or so and people are already envisioning the future generation of Apple tablets. Luis Fonseca, a designer from Portugal created the iPad 4 concept you can see below and he came up with a pretty original device, I’ll have to admit.

This idea of an iPad 4 includes a sliding QWERTY keyboard and you can imagine here rather a MacBook turned into an iPad, rather than your average Apple tablet with a keyboard attached. The keyboard slides from the bottom and the new iPad concept features Bang & Olufsen speakers, a 12 megapixel camera with 1080p video capture and an aluminum frame. It can also be easily recycled, something that the designer felt the need to mention in the description of the product, so it means this is made with eco-friendliness in mind.

There’s also a portable hard disk created as accessory for the iPad 4, although with the iCloud out there, there’s not much need for extra storage, is it? I wonder if the new iPad can remain slim enough with this extra keyboard area and also I wonder if the display is still at Retina level. For some reason, I imagine this as a 7 or 8 inch device with quad core CPU and 1080p resolution… Would you buy it for $450 or so?