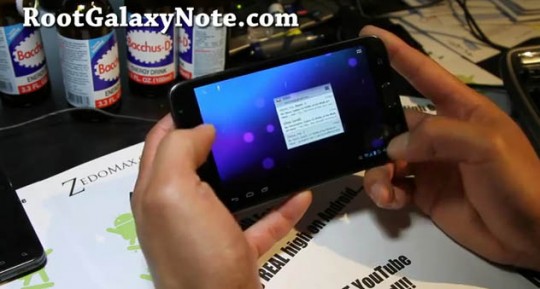 Of all the ways that I imagined Samsung Galaxy Note would get Android 4.0 ICS, receiving it in the tablet UI version was the last on my list. There was a Samsung Galaxy mod at some point that the turned its interface into the one of a tablet with ICS and now the same thing happens to the Galaxy Note.

An user from RootGalaxyNote.com posted a video showing the smartablet running in tablet mode. The 5.3 inch device can get the imilka custom tablet ROM from here, in case you own and you want to experiment. As you can see in the video below, there’s a ton of screen space managed the wrong way, which looks pretty weird to me. The experience is exactly the one on an Android 4.0 slate with the exception of the virtual pixel density. The interface is cramped a bit, but you will manage it, if you really like workarounds.

There’s always the S Pen to use to handle the UI and the thing is that this interface supports panel use and multi-column views in the apps that support them. The tablet mode is included within a specific ROM right now, so there’s no way of applying it on top of stock Ice Cream Sandwich. It’s also limited to the i7000 unit, the international GSM version of the Galaxy Note. Details in the video below:

Google’s Nexus Tablet Made by ASUS, Priced at $199, Packing Tegra...