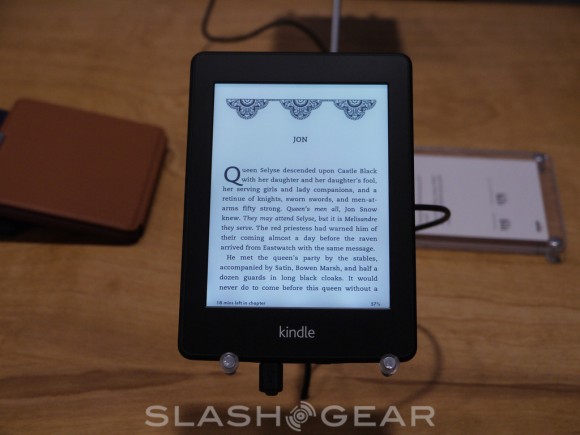 Amazon has just released a new video showcasing their new PaperWhite e-reader screen technology, that’s supposed to be something very special. Kindle PaperWhite was announced about two weeks ago and it has a special sharpness and brightness, surpassing many rival products. The product is priced at $119 and offers a 1024 x 768 pixel resolution.

It’s got a PaperWhite E Ink technology screen, with higher contrast than the E Ink Pearl screen from the previous Kindles. The new model also has a 3G version, priced at $179 and both will debut tomorrow in USA. As far as design goes, the new model is similar to the older Kindle Touch, but it does pack some tweaks, like a darker gray plastic chosen for the body and the Home button at the front has been removed. The power button can be found at the bottom together with the mini USB port, like on the predecessor.

According to Amazon CEO Jeff Bezos, the Research and Development department has been working on the technology behind the screen for many years, searching for the ideal balance between brightness and battery life. The technology here is described like a sort of optical cable laid across the display. The idea is to direct the light back at you by reflecting it like a lightbulb would on a book. The light at the rim of the display is captured and reflected across the face of the device, but more about that in video below: