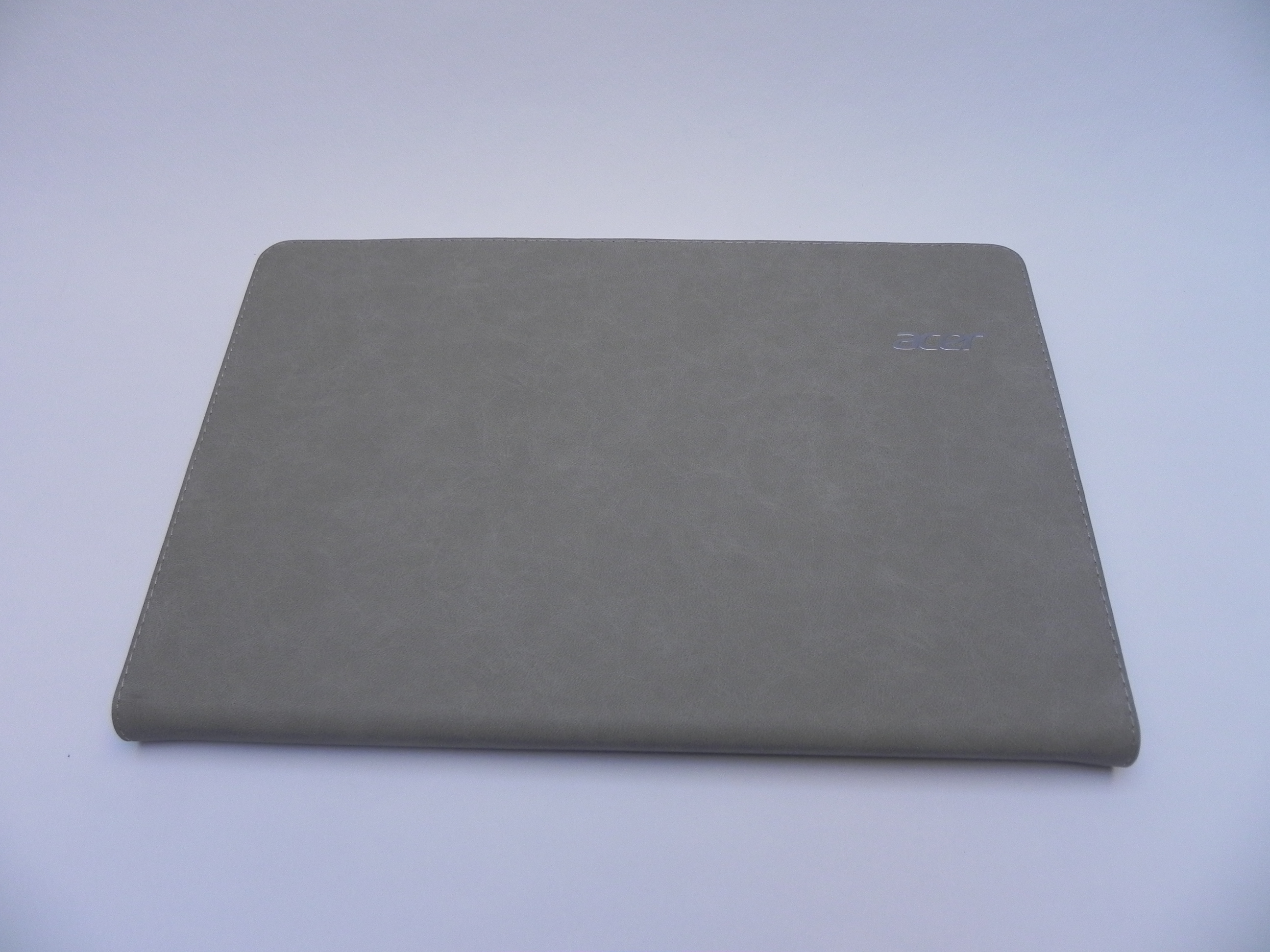 The Acer Iconia W700 aka the W7 is basically an ultrabook in a tablet body, because of the high ends specs it sports. We’ve got a bundled keyboard case with the slate and if you to know the price, the device goes for $700 in the Core i3 64 GB version. The 128 GB version goes for $1049 and considering I’m the owner of a Core i3 PC, I find it impressive that I’m playing with a Core i5 tablet. By the way this model is pretty similar to the freshly launched Acer Aspire P3, if you think you’ve seen it before. 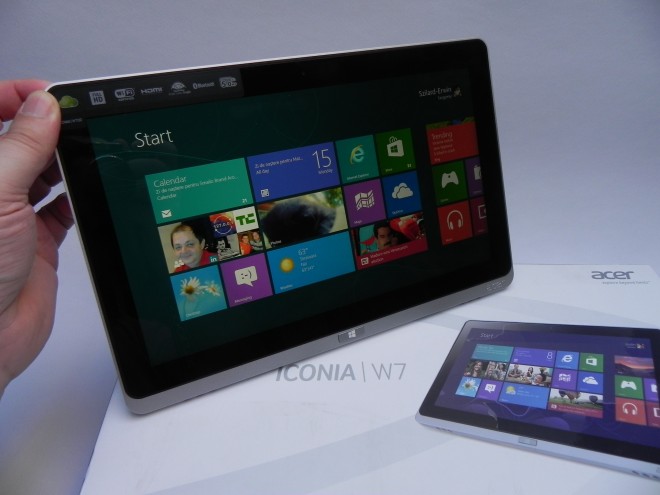 Acer Iconia W700 measures 11.9 mm in thickness, weighs 925 grams and it’s a massive piece of gadgetry. It’s got a 11.6 inch display and it’s basically a big piece of metal, a tablet made of aluminum. Because of its massive size, the device is hard to hold, but at least it’s sturdy. On the bottom of the tablet we’ve got its speakers, marked with red grilles, while up top there are two huge vents, that you’ll hear once you start playing a game on the device or doing some other tough task.

Those fans make quite a bit of noise, to be honest. At the back we’ve got a 5 megapixel camera without flash and on the side we find a USB port and HDMI port. The keyboard cover has a nice soft touch feel to the hand ad it’s quite hard to remove the slate from its plasticky holding place. Its keys are comfy and the whole experience is on par with what ultrabooks can offer. 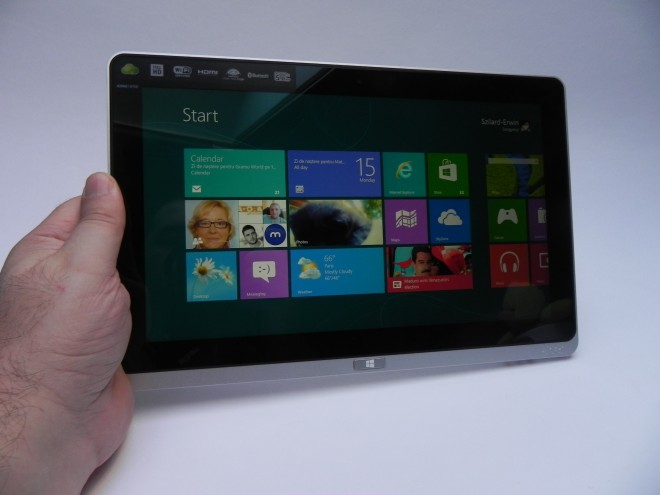 On the graphics side we’ve got a Intel HD 4000 solution and in the connectivity area there’s WiFi, Bluetooth 4.0, USB 3.0 and HDMI. This Acer model packs a Li-Polymer 4850 mAh battery, good enough for 9 hours of use on paper and in our test of continuous and intense usage, we got 6-7 hours from it. All of that is done by a 3 cell power source. 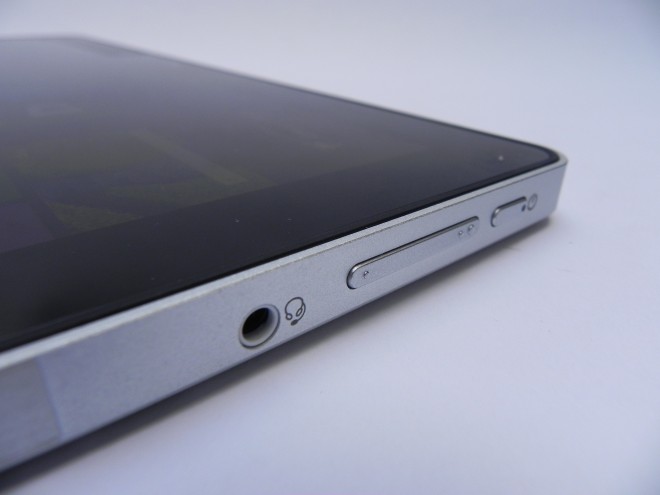 As far as the audio experience goes, we’ve got Dolby technology on board, with a bunch of settings available and special functioning modes and equalizers, all of them very useful. However, overall, this tablet is below the Nexus 10, when it comes to audio quality and volume. At least the audio is crisp, clear and we have a decent bass.

Concerning video playback, the Full HD screen has 178 degrees of viewing angle, which we loved and also we appreciated the 10 point multitouch, the fact that the display is not glossy and the great colors. Brightness was spot on and the Gorilla Glass presence was welcome. Finally, the 5 megapixel camera feels rather useless for a tablet that weighs a kilo, but if you want to have fun with various Acer Crystal Eye settings, go ahead. 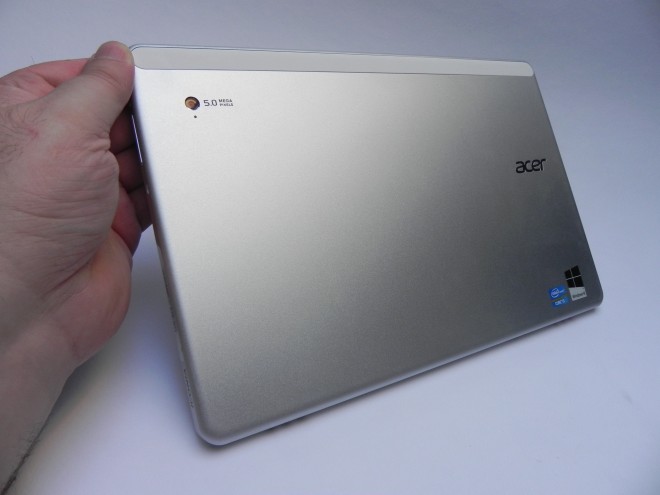 Acer Iconia W700 boots in 6 seconds, it takes it 1.5 seconds to resume activity and 2.5 seconds to get online. We’ve also got that trademark Acer Ring UI mechanism, with quick shortcuts and access to main features like documents, pics and various settings. In the benchmark area we used PC Benchmark and found the write speed of the SSD to be bigger than the one of provided on the Lenovo IdeaPad Yoga (455 Mbps versus 263 Mbps).

Since this is a full fledged Windows 8 device, you’ll be installing apps from the Windows Store and also getting them via .EXE files, the good old fashioned way, like in Windows 7. We’ve also got an Acer apps section, with Acer Explorer for the basic apps you need to get going, News Expresso as a news aggregator, Social Jogger as a Flipboard alternative and the usual collection of Bing Maps, Mail, Xbox Games and all those Bing services. Finally, we showed you Resident Evil 6 running on the tablet, a game that was launched only days ago. 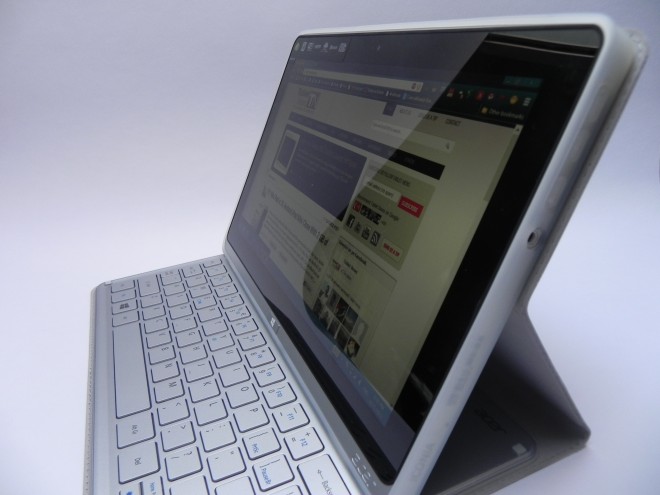 It’s able to run the game in Full HD with all the High details, but in a choppy way. Drop those details to Medium and the resolution a bit and you’ve got a golden experience. Finally, Acer also provides some of its cloud goodies here, for syncing pictures, documents and songs. And now here are the Pros and Cons related to the slate.

We give this product a 7.8 out of 10 for design, a 9.5 out of 10 for hardware and a 9 for OS and UI, for a total of 8.76 out of 10. It’s trully a great ultrabook replacement and you’ll probably never need a laptop again. It does have its disadvantages, like the huge size, but at least we’ve got a Full HD screen and top notch CPU .