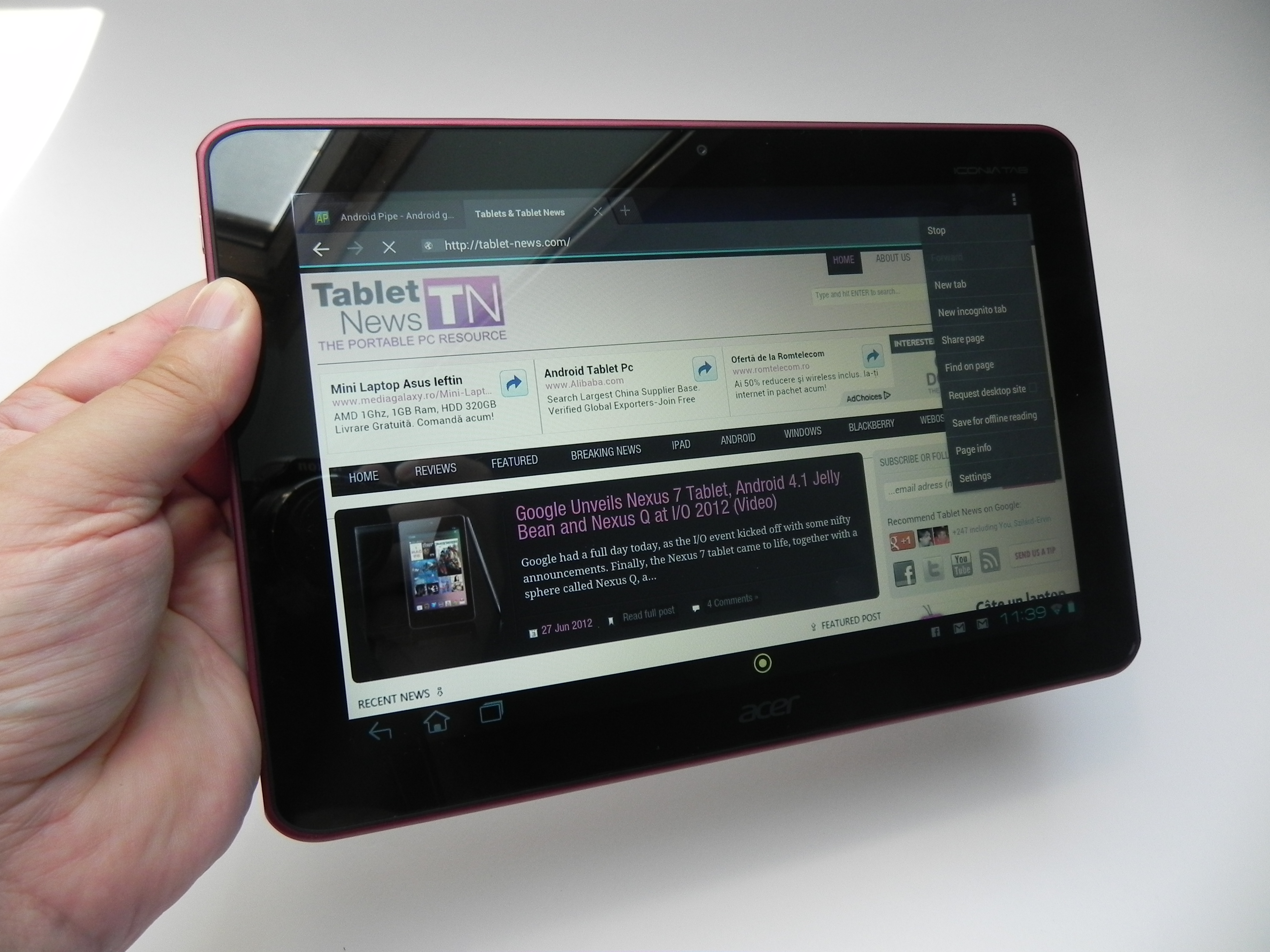 We’ve recently had the opportunity to test one of the few Tegra 2 tablets that still matter this year, the Acer Iconia Tab A200 and what came out of that experience was a detailed video review that you can watch after the break. This device goes for $329 and it was announced in early 2012. It’s available in red or grey, but we tested the red version here. 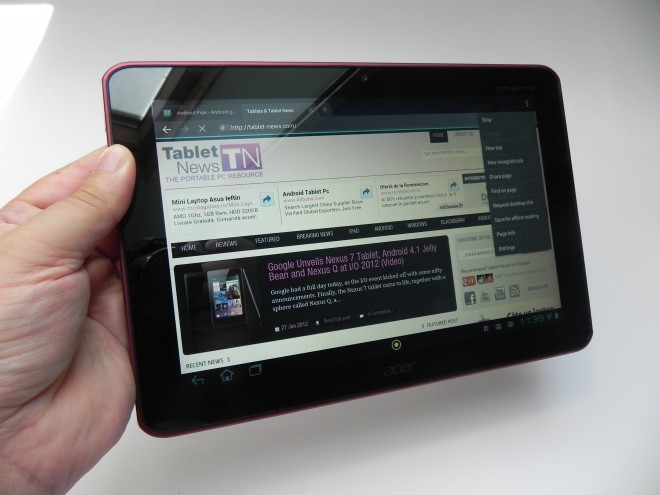 The first thing you notice about this device is that it lacks a main back camera and that it comes with a rubbery back with dual speakers incorporated. The rubbery back offers both grip and more resilience versus hard contact or scratches or even dropping the slate. This is still a bulky, big, heavy device, but luckily it brings some useful ports and slots with it. It has a front camera as well, plus a microSD card slot, a full USB port, an audio jack, a reset button (hidden under a lid with the microSD) and a miniature USB port. What’s lacking here is obviously the HDMI port, that wasn’t included by Acer.

The device measures 12.4 mm in thickness and weighs 700 grams, which is what actually makes it so bulky and heavy. The display on board is a 10.1 inch 1280 x 800 pixel unit and the tablet is available with 8, 16 or 32 GB of storage, 1 GB of RAM, WiFi, Bluetooth 2.1 and USB 2.0 connectivity. The camera upfront is a 2 megapixel unit meant for videocalls. The CPU inside is a Tegra 2 dual core 1 GHz unit, accompanied by a ULP GeForce GPU. An accelerometer and gyroscope are among the specs, but no GPS here, so you’ll have to do with WiFi-based localization. 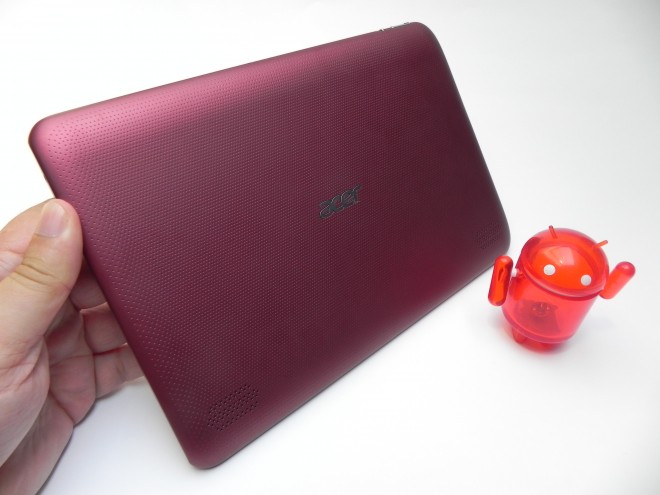 The battery on board is a Li-Polymer 3260 mAh unit, very unimpressive if you consider that even a smartphone such as the Motorola Droid RAZR Maxx has a better battery nowadays. Acer Iconia Tab A200 offers 8 hours of battery life and the first bad thing I can say about the product is that it has a glossy display. As far as OS goes, it runs Android 4.0.3 in a custom version, with a customizable lockscreen with several apps that can be opened straight from the unlock ring.

Speaking of rings, at the bottom of the screen there’s a green circle that grants you access to Acer Ring UI, a circular interface displaying some of the tablet’s main features, such as bookmarks, gallery, a search option, volume tweaking and screenshot. You can customize all of them, obviously. Another bad thing about this device is that at times you can feel it lags, especially if you load your screens with dynamic widgets. Speaking of widgets there are a few unique ones, like the one for weather and time or the Social Jogger one. 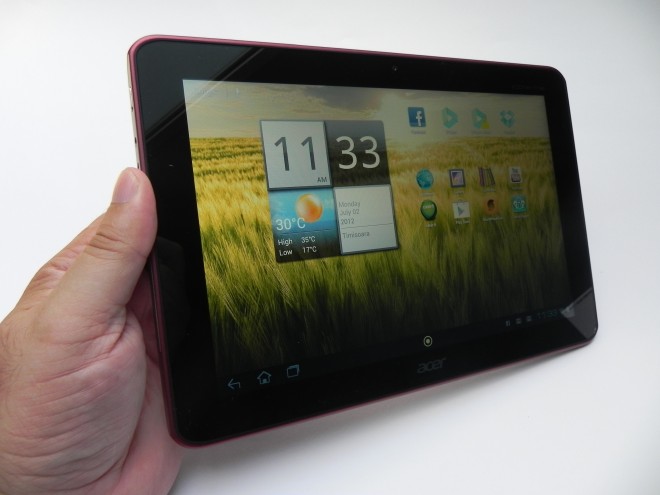 On the video and audio side there are no complaints, as the viewing angles are OK, clarity and quality are great when watching movies and the audio has good volume and clarity. There’s also a special app for media content playback, which also includes pictures and the software is called Clear Fi. It’s got a pretty antique interface and it’s kind of slow, so it didn’t impress me. The browser and virtual keyboard on the tablet work just fine and other stuff to look out for is the Astro File manager, that does its job great and has fast file transfers and the Lumiread app for book reading and downloading. 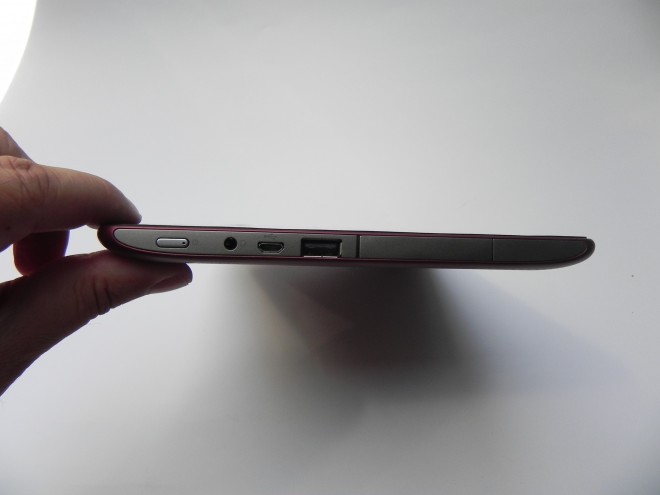 There’s also a very nice radio app called Aupeo, that chooses music depending on your mood and allows you to get started right away, without hassles. It has a variety of genres and radio stations. And then there’s Social Jogger, a social networking app, with Twitter and Facebook support and semicircle wheel used to navigate around statuses, links and pics. Very uncomfortable to use and its interface feels like the 1990s! And now let’s get to the pros and cons for buying the Acer Iconia Tab A200.

On the pro side we’ve got Android 4.0, the Acer Ring UI, that does no harm and doesn’t slow down the system, plus it looks nice, the interesting apps bundled with the tablet, good video and audio quality and grippy back surface of the tablet. On the cons side we’ve got the lack of HDMI, poor battery, heavy tablet, the big price, a bit of lag and glossy screen. Overall we give this model an 8 out of 10 for design, 6 for hardware and 7 for OS and UI, for a total of 7 out of 10.