Apple’s WWDC 2013 event came today and everything that was rumored turned into reality, including the flat UI of iOS 7. The event started with the usual bragging about various percentages of increase in the Mac area and iOS, too. Then came the harsh truth of a small OS X update called Mavericks…

This release will bring a Safari browser with less memory usage and smoother scrolling. The desktop OS can now show the notifications that you get even when you’re not near the PC, so when you start up the device, you’ll receive them in bulk. There’s also support for background updates and the calendar from OS X gets a slight revamp. Other things integrated into the OS are tags, multiscreen support and a more efficient memory management. OS X Mavericks comes this fall for regular people and devs get it today.

Apple also announced iTunes Radio, the rumored music streaming service that’s included in the Music app on iOS. It offers you the ability to switch between radio stations and even create your own. There were also some updated MacBook Air models announced, with Intel Haswell CPUs and the 11 inch version is supposed to offer 6 hours of usage, while the 13 inch one will reach 12 hours of fun.

The 11 inch MacBook Air will start at $999, while the 13 inchers goes for $1099. Speaking of hardware, Apple also unveiled the new Mac Pro, with a beautiful sci fi design and the promise of US assembly. This device packs an Intel 12 core 256 bit Xeon processor, a huge amount of flash memory and Thunderbolt 2 support. Moving further, to iOS 7, Tim Cook dubbed it “the biggest change brought to the platform since the first iPhone”. The first thing you’ll notice is the new set of icons, that now lack the 3D graphics of the previous iOS iterations and they get more transparency.

Jony Ive, the man behind the new iOS and also the man behind the iPod and iPad design claims that this is a fresh start for Apple, but if you ask me, it’s a return to the early 2000s… Apple implemented in iOS 7 a feature called Control Center, that includes toggles such as WiFi, AirPlane Mode, Bluetooth, Night Mode and Rotation Lock. They are accessed through a bar that’s available if you swipe from the bottom to the top. 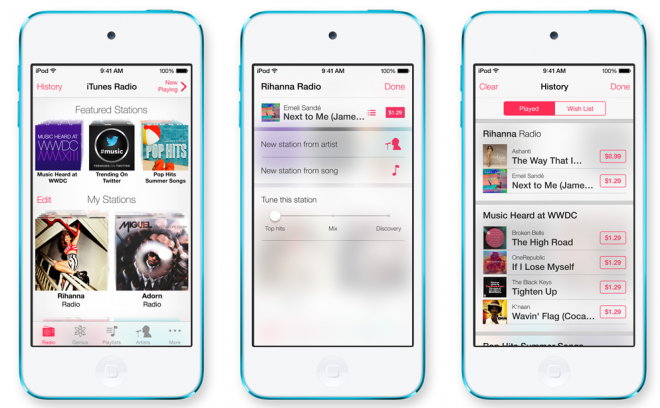 The OS design involves a slight transparency, so with every change of wallpaper brings a new hue in the entire OS. There’s also a new Safari browser included in iOS 7, with an unified address bar and search bar, just like the desktop Safari. There’s also automated suggestions from Google and a new bookmark system. There are 3 tabs in the upper area of the screen (Bookmarks, Shared Links, Reading List) and the new Safari takes up the entire screen and there’s a new carousel view of the web pages. 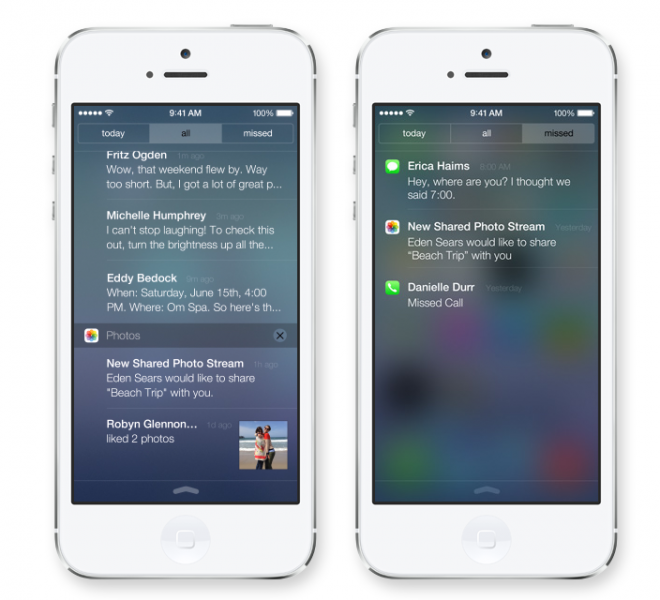 There’s no limit to the tabs you can open and you can change their order as you please. Apple now offers you the option to access the notification center in the lockscreen and allows users to see notification without unlocking the device. The Notification Center comes with 3 tabs: Today, All and Missed, with the first including calendar events and other notifications you need to access right away.

The lockscreen access gesture has also been changed, so instead of swiping to the right, you now swipe to the top. Siri now gets an alternative male voice, at least in English and it has new audio samples, plus Twitter link integration and Bing results. There’s also Wikipedia integration and picture thumbnail display when looking for pics.

AirDrop has now moved from the Mac to the iOS devices, allowing you to share media fast and efficiently. Finally, the camera app in iOS got those rumored filters, frames and a new way of managing pics called Moments. Apple Maps got turn by turn navigation for walking, a night mode and we also got a brand new multitasking system for iOS that reminds me strongly of the one in Windows Phone.

This is basically all you need to know about today’s event, that I’ll dare to call underwhelming in lack of a proper release of an iPad or iPhone. iOS 7 feels like a platform of 2003 or so, so it’s not looking good for Apple. Be sure to check out the stock price tomorrow for Apple!