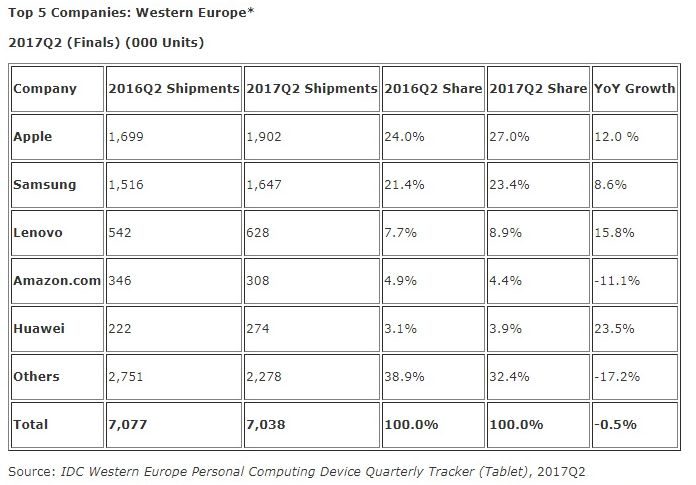 The sum total of shipped devices was 7 million, showing an almost complete recovery of the market in the region. Apple’s new tablets, the latest iPad Pro 10.5 and the new 12.9 incher drove the market up. The macroeconomic situation in some European countries seemed to improve and this also helped with the sales. Detachables experienced a 1% year over year growth and the slates decreased just 1% this time.

The commercial segment performed well, with a 2.8% year over year growth. Apple and Android-based detachables were key for that, growing 29.3% and 34.9% compared to last year. Detachables were the strongest growers in the corporate area. The consumer segment also did a bit better, perhaps thanks to the new cheaper iPad, at $325. The back to school period is expected to bring even more growth, especially in the Nordic countries, where the public space acquisition will certainly be felt.

A growth of 37% is predicted there. In the private sector, Android-based devices had nice figures in both SMBs and large enterprises, plus they grew 16.2%. Apple is still number one in market share, with 27% and a growth of 12% thanks to the released of the new iPad and iPad Pro. Samsung is second, with 23.4% and an 8.6% growth from last year. Lenovo gained 1.2% market share and reached 8.9%, to be third.