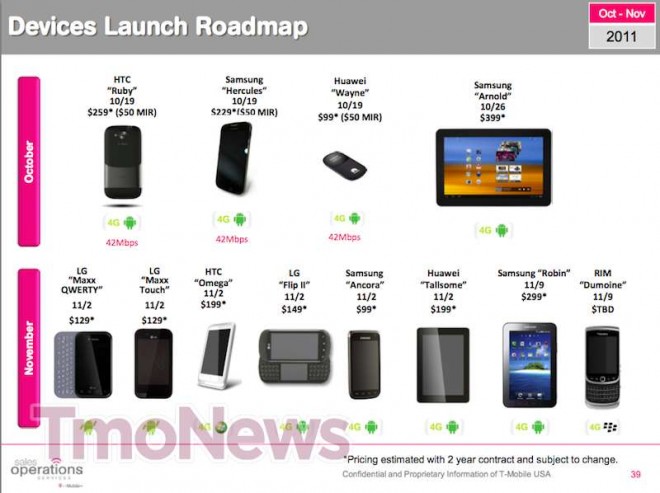 It will be a hot month in November, although it might snow early this year… T-Mobile plans on making the next month ideal for shoppers, by launching a bunch of long awaited tablets and smartphones, according to its leaked devices roadmap.

There’s also a 2 November super mega launch day, that will involved the Samsung “Robin”, a codename for the Galaxy Tab 7 Plus 7 incher that was recently announced. This model will be made available on November 9th. The roadmap also includes the debut of the Samsung “Arnold” aka the galaxy Tab 10.1 tablet, accompanied by the Huawei Sonic 4G Mobile Hotspot.

There’s also a so called Huawei “Tallsome”, most likely the MediaPad slate, that was the first to sport Android 3.2 Honeycomb till now. Other than that there’s a huge list of LG handsets coming, as well as HTC models and some Samsung newcomers. In preparation for Black Friday, this looks like an excellent day to start ordering stuff.

Nexus 7 Dock is Finally Here, Available on the Google Play...