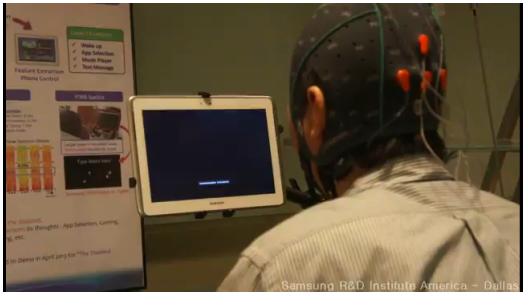 The fact that Samsung is one of the manufacturers that aims for revolutionising the way we handle mobile devices is an aspect unquestioned. With each of its new devices the manufacturer provides some form of gesture control and even automatisation system for a ne usage experience.

How about a technology that lets you access your device without ever having to touch it. Sounds like something from the sf movies and for the better part it is. But the fact is that we are getting there and Samsung is one of the manufacturers willing to bring its contribution. The purpose is to create a device that is controlled by brain activity, with the brain impulses treated like actions to be interpreted by the mobile device.

The Samsung Galaxy Note 10.1 is the lucky device to be selected for testing of the new technology that uses EEG-detected brain signals to control a smartphone, tablet or other device. The Samsung and UT Dallas researchers monitored well-known brain activity patterns that occur when people are shown repetitive visual patterns. Robert Jacob, a human-computer interaction researcher at Tufts University, states:

“This is one of the ways to expand the type of input you can have and still stick the phone in the pocket,” “Several years ago, a small keypad was the only input modality to control the phone, but nowadays the user can use voice, touch, gesture, and eye movement to control and interact with mobile devices,” says Kim. “Adding more input modalities will provide us with more convenient and richer ways of interacting with mobile devices.”

Samsung Galaxy Note 8.0 Now Up for Preorder in France, Priced...