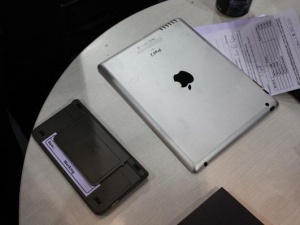 Reuters has an incredible scoop concerning yet another leak in Apple’s back yard. Yes, it’s the iPad 2 this time, the new generation of slates, that’s been spotted yesterday during the launch event for The Daily. This is the first real iPad 2 sighting, folks.

There’s an eyewitness who spotted a working version of the device and said that it comes with a front camera, but that source couldn’t say if the slate uses a card slot or not. Apple and News Corp refused to comment on this happening, although there are voices saying that we’ll witness the unveiling of the iPad 2 sooner than we had thought, on February 9th.

The iPad has been a great success in 2010, reaching 14.8 million units sold last year. We expect the iPad 2 to beat those figures. It’s strange to think that HP will unveil its new webOS tablet on the same date, 9th February and these are two US companies competing. so it’ll get rough.

Apple Prepping Sidecar Feature to the Make the iPad a Second...