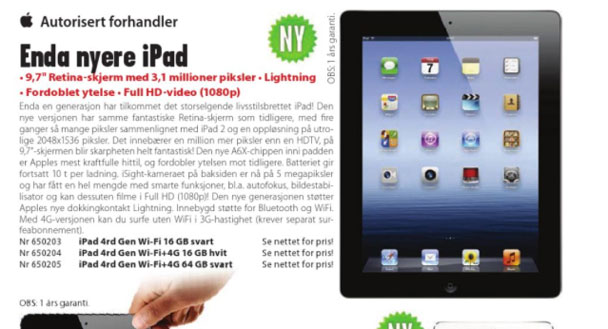 When the iPad 3 was launched earlier this year, Apple hesitated to call it the iPad 3 and simply branded it “the new iPad”. And when the iPad 4 was announced last month, they also didn’t call it iPad 4 but rather fourth generation iPad or once again new iPad. So what’s a store left to do when both products are available in the window shop?

The folks of Pocketables have uncovered that some stores are having problems with selling the iPad 4, since they still sell the iPad 3 as the New iPad. I wonder how Apple got away with it so far, without being sued, like they were for the “4G” promised in some parts of the world. What’s worse is that if you put two boxes with the iPad 3 and iPad 4 side by side even experts will be confused by how similar they are.

At the moment Apple is also phasing out the old iPad, by offering a discount, so they have to be extra careful when crafting their promotions and posters for this product, since simply introducing it as the “iPad” may cause confusions. There’s not even mention of Retina Display iPad or A6X iPad in the retailer’s offer, so you have to be extra careful what you buy. Anyone feeling fooled by this branding?

Apple Gets 59 New Patents Covering Foldable Devices, Side Screens and...