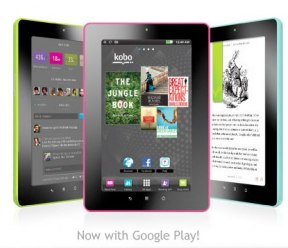 Believe it or not, it pays to have an e-reader these days, especially if it’s a model that now supports Google Play Store, like the Kobo Vox e-reader. The device now offers access to the hundreds of thousands of apps offered in the Google application store. This is the company’s answer to the B&N Nook or Kindle Fire from Amazon.

In case you’re wondering, Kobo’s product has a price tag of merely $179.99 and till now it had a limited curated collection of 15,000 Android applications available. Now it gains access to around 500k, a major improvement. Google Play Store also brings music and movies to the Kobo Vox users. Kobo also made another announcement recently, saying it will act now in the free, self publishing area, through the Kobo Writing Life, a platform launched early this month with beta testers.

It’s a more open alternative to the free publishing, based on ePub files and allowing authors to set books to “free” without exclusive agreements applied. Usual apps and services such as Gmail, YouTube, Google Maps, Calendar and Contacts work on the Vox slate without problems. Just so you know, Kobo has its HQ in Toronto, but it’s owned by Japanese e-commerce company Rakuten. Kobo has 8 million users in 190 countries all over the world.