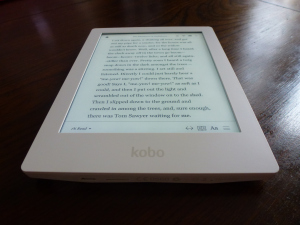 Kobo is a Canadian e-reader company that takes on the likes of Barnes & Noble and Amazon and still survives when battling these giants. Today they enter the news with a brand new e-reader called Aura, a model they’ve just launched.

By the way, this company is actually owned by Japanese firm Rakuten, an e-commerce giant, so that’s how it stays alive in this climate. Their newest device is the Aura HD, an e-reader with a 256 dpi pixel density, on a 6.8 inch diagonal. It also has 4 GB of storage and a two month battery life. All of these are available with a price tag of $169.99 and specs also include a 1 GHz CPU and expandable memory.

The product debuted in London, coinciding with the London Book fair. Kobo has further plans, including the launch of its own app store later this year. Kobo CEO Michael Serbinis claims that the company wants to expand further than books and reach out into magazines, kids content and more. The idea is to incorporate more of Rakuten’s products into the business and by the way Rakuten is a big investor in Pinterest, so we may also find that integrated.