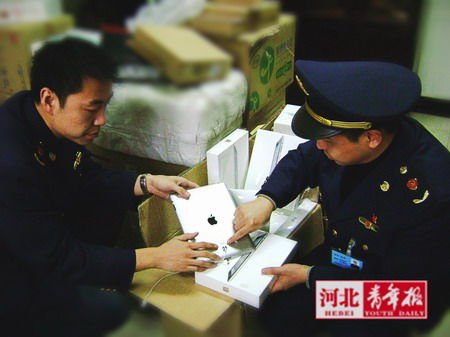 Apple has huge problems in China, a market that Steve Jobs has always dreamt of conquering… After losing the trademark for the iPad brand in China, now the Cupertino giant has had its iPad 2 units seized from stores in the largest Asian country. Retailers have had to hide their stock of the iOS slate and it all follows the lost of a lawsuit against Proview Technology, a Chinese company that owned the name “iPad”.

The Chinese Administrations of Industry and Commerce has already confiscated 45 iPad units at 5 pm local time, according to the Hebie Youth Daily publications. Shoppers are now required to ask in order to get a tablet, since the bulk of the stock is hidden. Some retailers have made unavailable the entire stock for fear of the authorities’ punishment and trying to avoid seizure from the law. Under the counter sales are still big and I guess that some retailers will even be willing to lower prices to get rid of the problematic product, so now’s the time to get a cheap iPad 2!

Proview managed to somehow win the trial and convinced the Chinese court that the iPad trademark belongs to them, after being filed back in 2000, long before Apple even dreamt tablets. However, the trademark was purchase by other companies and subsidiaries of Proview that eventually sold them to Apple. Well, that didn’t hold in court… Now let’s see how this situation progresses. In the meantime Proview requests $38 million in compensation from Apple.