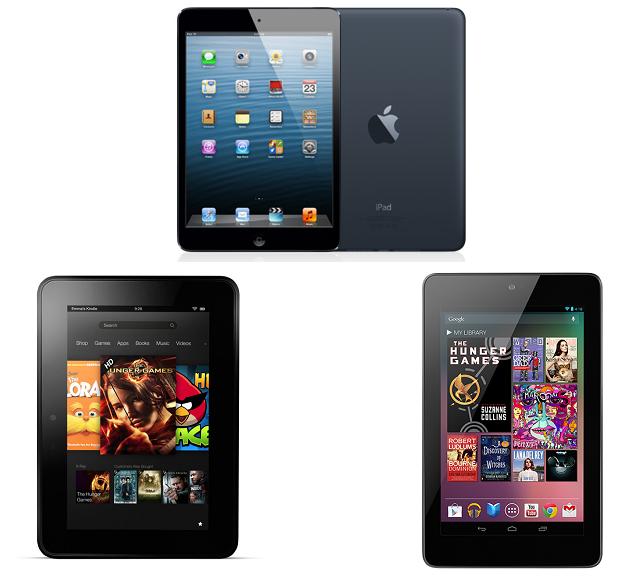 It was logical that once the iPad Mini was launched comparisons with 7 inch tablets would start. That’s why we get to see the table below, one that features the specs of the iPad Mini, Kindle Fire HD 7 and Nexus 7, to get a better idea of what our future Christmas purchase will be.

In short the iPad Mini is an iPad 2 with a smaller screen, but it should also have a better camera and I’m not sure if it has the same amount of RAM or more. So, when you look at all the 7 inch Xmas candidates here you see that we’re dealing with two dual core tablets (iPad Mini and Kindle Fire HD 7) and a quad core one, Nexus 7. On the resolution side Apple has a slight disadvantage, since it has both the bigger 7.9 inch diagonal and the smaller resolution: 1024 x 768 pixels.

The other models support 1280 x 800 pixel resolutions. On the storage side, they’re all pretty much equal, but Apple has a bit of an advantage since it goes up to 64 GB in storage, while Amazon’s and Google’s products stick at 32 GB. And there’s the matter of the OS, with iOS 6.0 being superior to Android 4.1 and Amazon’s experience, at least when it comes to the number of apps optimized for tablet use (over 200k). On the connectivity side Apple triumphs with 2G/3G/4G/LTE over nothing on cellular level on the Android rivals.

Add the fact that we also get a camera, a pretty good one on the iPad, plus 10 hours of battery life and you’ve got a winner: iPad Mini. Willing to sacrifice the screen to get it?