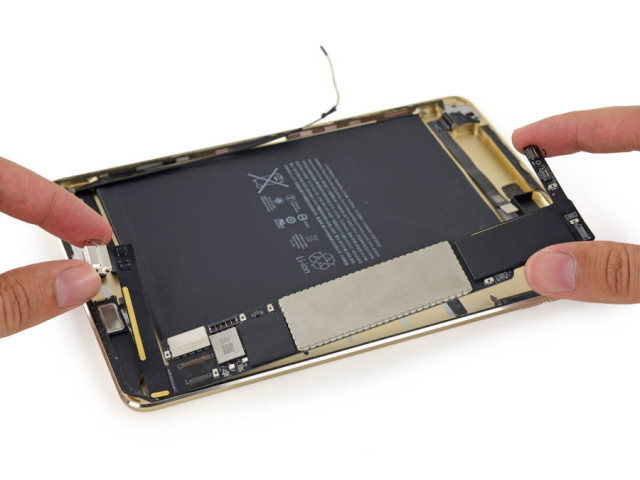 Apple has always been secretive about the specs of its devices, especially when it comes to core numbers, clock speeds and RAM quantity. That’s why we have to rely on teardowns and benchmarks to learn something about freshly launched Apple phones or tablets. Today thanks to iFixit we learn a thing or two about the iPad Mini 4.

The device was announced on September 9th, together with the iPad Pro and thanks to the teardown we now know it comes with an Apple A8 processor. That was also confirmed by a previous benchmark from Ars Technica and it appears this chip is a bit faster than the same model present on the iPhone 6. The really interesting discovery here is the battery, much smaller than the one of the iPad Mini 3.

While the previous iPad Mini had a 6,471 mAh battery, the new one adopts a 5,124 mAh and the difference between the two is good enough to make a handset’s battery. In spite of that Apple claims the two models offer similar battery life. We’ll see… In the meantime iFixit gave the iPad Mini 4 a 2 out of 10 rating for repairability, on account of its fused LCD and glass panel and the big quantity of adhesive used.