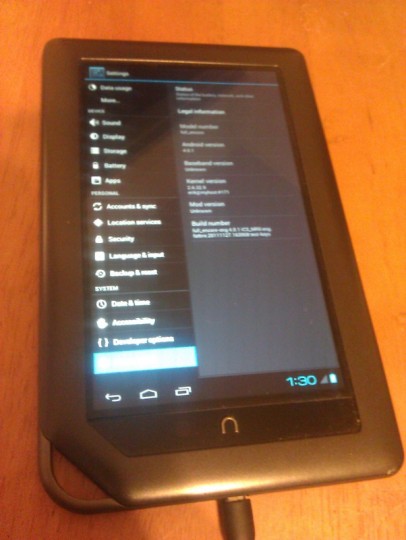 The CyanogenMod 9 ROM with Ice Cream Sandwich has started hitting all shapes and sizes of Android devices lately, including some popular units such as the Amazon Kindle Fire and even the quad core Transformer Prime, as far as I know. Now the software reaches the famous Nook Color tablet, a pretty hackable device that got Honeycomb before many other slates.

The folks of XDA Developers are as usual behind this idea involving Ice Cream Sandwich. Right now we’re dealing with a sort of alpha implementation with early working phase of the ROM, but at least it’s getting done, as proved by the screenshots. Many key components are working just fine, but stuff such as audio and hardware acceleration is a bit screwed up right now. Of course, if you own a Nook Color tablet you might not want to try CyanogenMod 9 as your daily ROM on this device, but it’s probably a fine way to get a teaser for Ice Cream Sandwich.

You need serious hacking to get this working, so if you’re a newbie in the custom software biz, stay way… I mean really, stay away! If you really are a modder and hacker, feel free to check out the source link below.