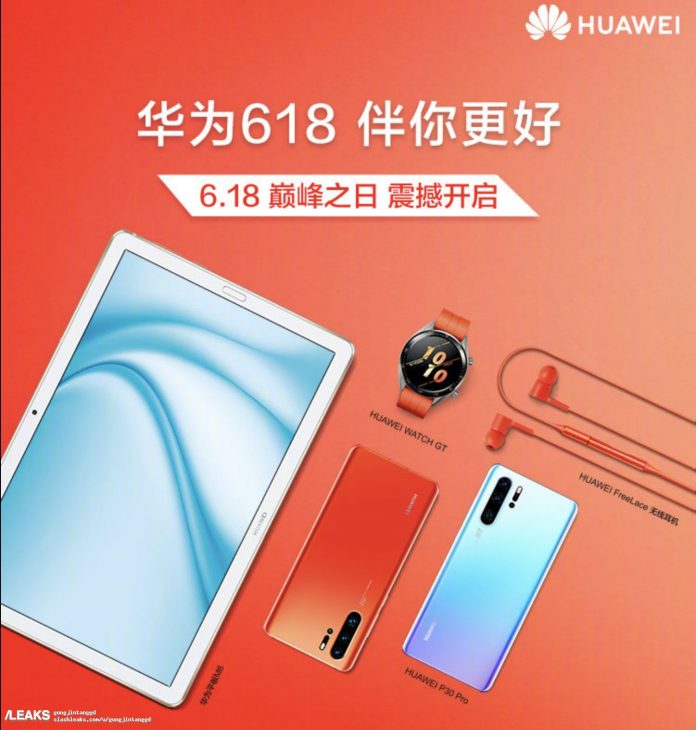 Huawei may not be doing so great right now, but it has picked up some momentum on the tablet market. Thus, it’s no wonder it’s preparing a new tablet, the Huawei MediaPad M6, which already leaked a bunch of times and now it appears again, in a poster from the store Vmall.

The device seems to be pictured on a 10 inch version here, together with other Huawei products, like the Huawei Watch GT, Huawei P30 Pro and a pair of headphones. Rumors say that the Huawei MediaPad M6 will be available in 8.4 inch and 10.7 inch versions. They should have a resolution of 2560 x 1600 pixels and a back camera with a 13 MP sensor, plus a front 8 MP camera.

The battery capacity will be 4200 mAh and 7200 mAh respectively. The headphone jacks will be kept, unlike the Galaxy Tab S5e and we’ll also see USB Type-C ports on board. Oddly enough, the 10 inch tablet pictured here even has a physical Home button, that may hold a fingerprint scanner.

Last we heard the MediaPad M6 was launching alongside the Huawei Nova 5 phones on June 21st. A champagne gold version is expected, plus a white one and quad speakers, as well as a Kirin 970 CPU inside and EMUI 9.0 on top of Android Pie.