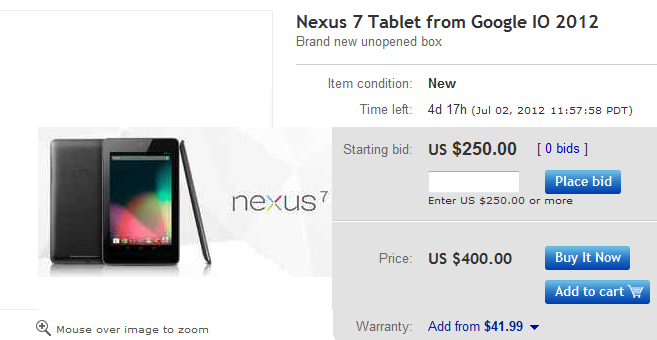 Yesterday Google officially unveiled the Nexus 7 Tablet at I/O 2012, taking place in San Francisco. Together with the new tablet they also showed the world the new features of Android 4.1 Jelly Bean, but let’s talk about the 7 inch quad core tablet some more. Announced by Google as priced at $200, the device already surfaced on eBay with a $400 asking price.

I guess that this is one of the models that Google handed out for free at the conference yesterday. The reason for people to purchase this model off eBay is that it’s a pretty unique opportunity to get in touch with Android Jelly Bean, before it launches on compatible devices. Also, the Nexus 7 tablet will only debut next month, so there’s some waiting time till that moment. 6,000 attendees of Google I/O scored one of the new tablets and I expect to see quite a bunch of models up on eBay over the next days.

The unit you see here being auctioned has a buy now price of $400 and one seller wants $1,500 for his slate. That’s a pretty nifty profit for a guy who attended Google I/O, right? I also expect the Nexus Q to reach eBay in a similar fashion, with a much bigger price tag.