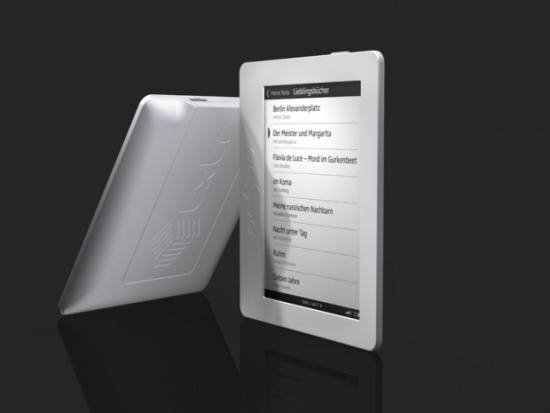 Deutsche Telekom has got a new e-book reader ready, that’ll probably rival the Amazon Kindle model, Its name is a bit odd, “txtr” and the product was announced at the Frankfurt Book Fair, going on in Germany as we speak. Turns out that the new e-reader will make its debut locally on December 1, as pre-order material.

txtr is the brainchild of a Berlin start-up bearing the same name and you have to know that the e-reader comes with a 6 inch grayscale e-ink display, a microSD card slot, a 532 MHz ARM11 CPU, 64MB RAM, a micro-USB port and a pretty long battery life, as claimed by the company making the device. It measures 151 x 131 x 12mm, weighs 281 grams and it’s bundled with an 8GB card.

You’ll be able to download books and documents using the USB port of the German product, that also supports Wi-Fi 802.11 b/g or the EDGE/GPRS connectivity. This reader will also display PDFs and books in the EPUB format and at this moment, there are over 10,000 books available in the official txtr store, 3,200 of them being English works.

The main drawback of the txtr is its price, $480, quite a lot of money, when you compare it to the Kindle.