Rounding up today’s Lenovo launches at CES 2018 is the Lenovo ThinkPad X1 Carbon 2018, which is a 14 inch laptop, that offers an ultrabright screen. This is actually the sixth generation of ThinkPad X1 Carbon, if you can believe it.

So, the screen we mentioned… yes, it’s bright at 500 nits, much brighter than most products on the market, that offer around 200 or 300 nits. This is a 14 inch screen we’re talking about, an IPS LCD, but a non touch one. It’s got a 2560 x 1440 pixel resolution and Dolby Vision HDR certification. Coupled with that there’s Dolby Premium Audio, by the way.

We also see there’s a physical lens blocker, in order to prevent privacy breaches via webcam. There’s also a fingerprint scanner for authentication and the X1 Carbon runs on Windows 10 Pro and uses something called “ThinkPad Crystal Image”, a software profile which reduces the number of preloaded apps, plus it prepares the system for Microsoft AutoPilot, which is a more streamlined way of automatically deploying software to laptops. 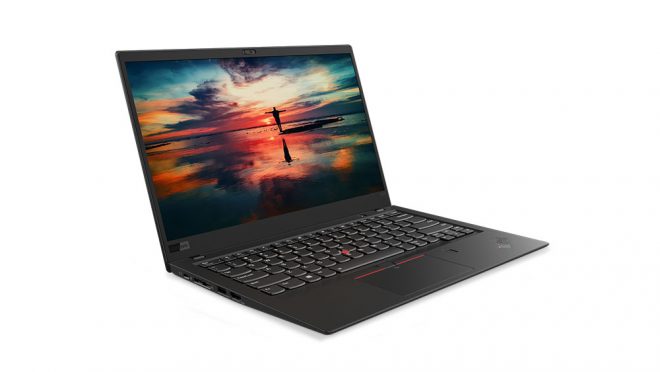 There’s Amazon Alexa compatibility here and the actual hardware specs include an Intel Core i7 8th generation processor, up to 16 GB of RAM and a SSD with up to 1 TB of storage. The industrial design of the ThinkPad X1 Carbon brings forth minor changes from the previous models in the series. It weighs 2.49 lbs and measures up to 15.95 mm.

Lenovo ThinkPad X1 Carbon 2018  MIL-STD 810G rugged certification and offers 4 USB ports, of which 2 are USB Type-C Thunderbolt 3 and two are USB 3.0. A multi card reader and full size HDMI are here too. WiFi ac and LTE are also in the mix. The price is $1709 and this bundle of joy ships this month.