After testing the ASUS PadFone 1 not once, but twice, we’re finally happy to deliver the full review of its follow-up, the PadFone 2. We were present in Milan when the device was launched in October and now we reviewed the slate and handset hybrid for a week and a half and we’re back with the conclusions. This combo doesn’t involve a keyboard, at least for now and it has a starting price of around 800 euro.

The product is available in black or white and I have to say that our white version is very, very rare. The product comes in 32 and 64 GB versions, but there will also be a 16 GB unit at some point. PadFone 2 involves a microSIM card slot, a 9 mm thick chassis for the handset and a weight of 135 grams for the phone yet again. The new PadFone Station tablet weighs 514 grams and it’s important to mention that the tablet and phone together weigh less than the iPad 3.

As you can see, the PadFone 1’s horizontal niche with lid has been replaced by a vertical slot without a lid, that will keep the phone well attached. It does that through a set of rubber brakes, that interact with the handset’s edges and grip it tight. At the back there’s also  teflon layer on the tablet, to avoid any possible scratches. I like the smooth texture of the slate’s back, while the phone delivers a more grippy back cover. There’s also a metallic edge around the smartphone, that makes it look a bit more elegant. 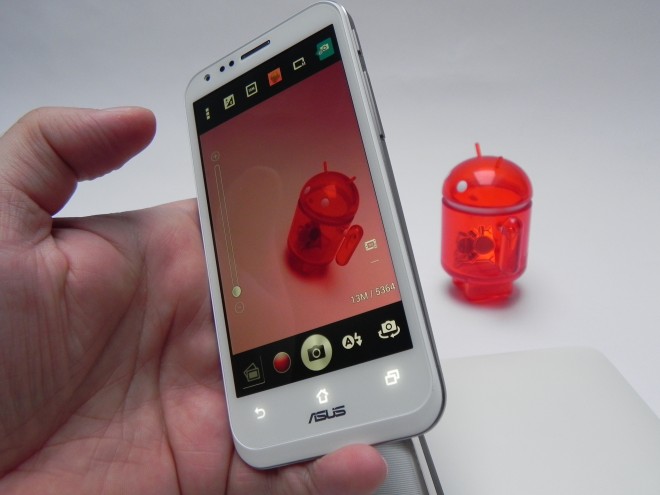 You should know that this is a 4.7 inch smartphone that gets inserted into a 10.1 inch tablet. The back cover of the PadFone 2 is non removable on paper, as is the battery, but practically you can mess around with them, but only if you know what you’re doing. One thing that I didn’t like about the PadFone 2 is the fact that the capacitive buttons are a bit too shiny and their lighting is too visible through the case, giving you a cheap sensation. Also, the handset feels a bit sharp in the user’s hands. Overall, the phone has the same design as the PadFone 1, but with a bigger diagonal.

As far as the tablet goes, the on/off button and volume buttons are very discrete and the bump of the phone slot is much, much smaller than on the first PadFone Station. Overall, the design is superior to the previous product in this line. Moving on to the hardware, ASUS PadFone 2 packs a Super IPS+ LCD screen with a 4.7 inch diagonal and a 720p resolution, as well as Corning Fit Glass protection. The tablet packs a 10.1 inch IPS 1280 x 800 pixel display, a 5000 mAh battery, while the handset uses a Li-Polymer 2140 mAh battery, bigger than the one on the PadFone 1. 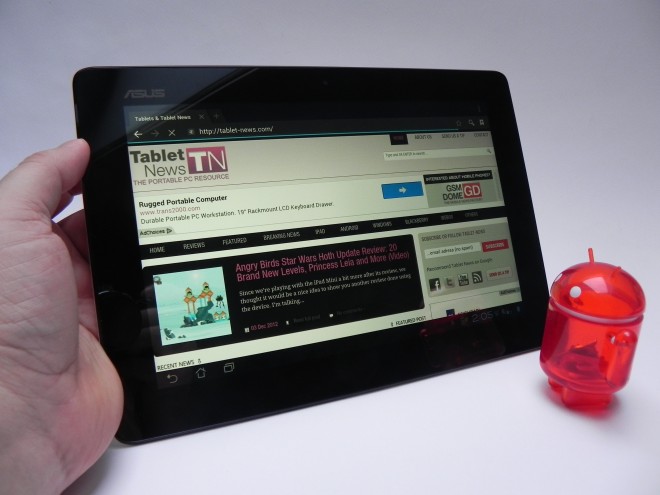 PadFone 2 has 2 GB of RAM, HSDPA connectivity, LTE, dual band WiFi, Bluetooth 4.0, NFC and a 13 megapixel camera, with autofocus, LED flash and Full HD capture. At the front of the phone there’s a 1.2 megapixel videocall camera and other specs of the device include Glonass, GPS and its brain: a quad core Qualcomm Snapdragon S4 Pro 1.5 GHz processor with Krait architecture. There’s also an Adreno 320 GPU in the mix and finally you should know that this device initially runs Android 4.0 ICS, but it already started receiving Android Jelly Bean in some areas of the world.

ASUS also offers 50 GB of cloud storage, if internal memory isn’t enough. If you wonder about battery life, the tablet and phone offer a total of 15-16 hours of functioning time. For us, with moderate use, the hybrid functioned for about 2-3 days. You should also know that Padfone 2 charges its battery to 100% in about 2 hours. Moving on to the audio side, the loudspeaker on the PadFone 2 is two times bigger than the one on the PadFone 1. The hybrid uses SonicMaster technology for great audio quality and ASUS says that the speaker is about 40% bigger than on any other model out there.

The amazing thing is that in spite of the power of the speaker, there’s no distorsion. The tablet loudspeaker is 32% larger than on any other tablet. This is where the Audio Wizard app comes in, with special settings and options, courtesy of the company called Waves. This is an audio DSP company, a sort of smaller Beats Audio. Audio Wizard adds extra warmth to tablet sound, which is incredibly crisp. Moving on to the video quality, the handset offers 500 nits of brightness on its Super IPS+ LCD screen, that’s very, very bright and has great viewing angles.

The 10 inch IPS screen of the tablet is also bright and crisp, especially when you activate that outdoor mode. And then there’s the camera, the 13 megapixel sensor that made quite an impression on us. We’ve got a full gallery of samples here and a video sample below. The camera features a Sony BSI sensor, 5 element lens, F/2.4 aperture, Beautyfication effects and it’s able to film in 720p at 60 FPS, or 480p at 90 FPS. There’s obviously Ful HD capture at 30 FPS and it looks very nice. 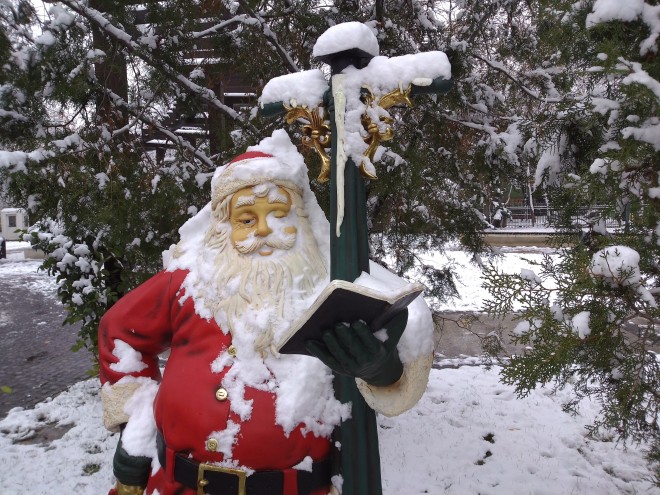 The ISO goes from 50 to 800 and we’ve also got a bunch of filters, HDR, Panorama and the option to take wide shots. Simultaneous video and photo capture are available a ton of burst shots can be taken at once. Overall, this feels like the camera on the HTC One X, but on steroids and we’re really happy with it. The only objection is that indoors is that doesn’t do that well. In the benchmark area, we tore down all records and rivals, scoring 7655 points in Quadrant, 21.000 in AnTuTu, 1992 in Vellamo, 58.6 FPS in NenaMark 2 and 1785 in BrowserMark 2.0.

The browser is fast and the virtual keyboard is comfy on both the handset and tablet. The most interesting thing about the duo is the dynamic use mode. This means that you can start watching a video on the handset and then insert it in the tablet and continue watching with merely a second of delay, much less than on PadFone 1. Android ICS is personalized with numerous toggles in the notification area, including one for a special dictionary and we also have some custom ASUS settings in the Settings area. 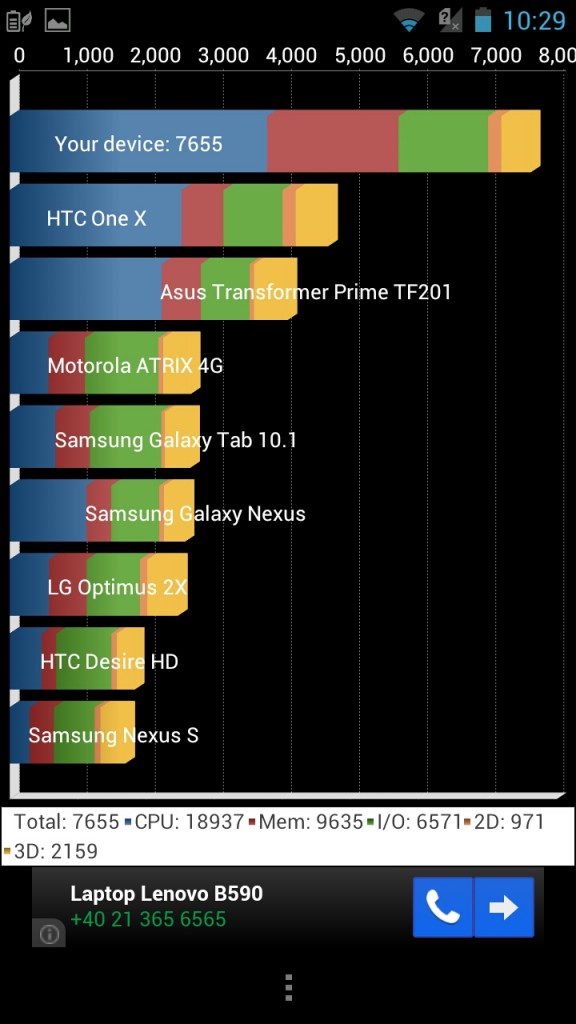 The bundled app collection includes an app backup, locker, ASUS Studio for pics/videos, My Library for e-reading, Polaris Office, Supernote for taking complex notes and Mybitcast for creating a multimedia journal. The audio quality of calls is excellent and you can also make calls from the tablet. And now it’s time for conclusions!

Here are the Pro aspects of the PadFone 2:

And the negative aspects:

As you can see the defects are minuscule compared to the upsides, so we give this model a 9 out of 10 for design, 9.5 out of 10 for hardware and 9.5 out of 10 for OS and UI, for a total of 9.33 out of 10. This is a great ASUS product, one that can easily keep you connected, entertained and working for at least half of 2013 without being surpassed by any rival.