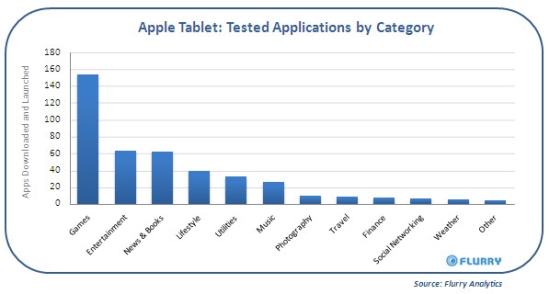 Flurry is a mobile app analytics company that has today’s scoop regarding Apple’s Tablet: it turns out that there are around 50 devices in Cupertino right now getting tested. By “devices” we mean Apple iPad units and Flurry found that a large number of apps have been downloaded on these, the majority of which were games, as you can see in the image below.

Flurry is a very reliable source on analytics data and when they usually have a story, it’s true and the facts are checked. We also learn that 140 of the tested programmes were games, followed by Entertainment, News and Books. We have to mention that these are iPhone apps we’re talking about, so the Apple Tablet will be compatible with these.

Also, the same analytics company noticed that Apple’s new device runs iPhone OS 3.2, not yet announced or available, but probably scheduled to debut on January 27th as well. Such tests are common for products about to be launched, so nothing unusual here, except for the joy of getting another confirmation of the device.