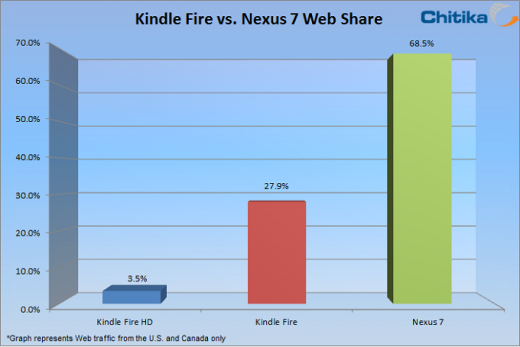 A recent analysis by Chitika, performed on ad impressions show that the Kindle Fire HD now stands for over one tenth of the total Kindle Fire market share. The device reaches 11% of that product line, but as shown in the graph below, it’s very inferior in stats compared to the Nexus 7.

One shouldn’t care too much about these statistics, since the Kindle Fire HD has only been on the market for less than 2 weeks. When weeks and months pass and the Kindle Fire HD and SD start gaining traction, their battle against the Nexus 7 may have different figures. Considering the target use of the product, it’s obvious that some people spend more time reading ebooks on the Kindle Fire, while they could be playing games or browsing the web on the Nexus 7.

We expect the Kindle Fire HD to start leading the pack soon, since it has the potential of selling more units than the Kindle Fire, especially since it has two versions available. Right now the statistics show that the Fire HD users browse the web more than the Fire, meaning that Amazon could have fixed that not so pleasing Silk browser.