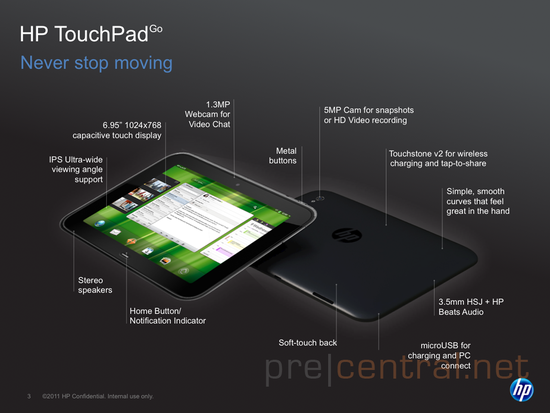 It’s not only sad that HP canned the TouchPad tablet, but also the fact that we’ll never get to see the 7 inch TouchPad Go. At least we have some info about the slate, that was supposed to be a 7 inch device, according to some recent slides that PreCentral got its hands on.

The device improves only a bit of the features of the original TouchPad, especially when it comes to design (metallic buttons for power and volume, soft touch back), plus it adds a camera, GPS and turn by turn nav via a Navigon app. With so many people looking into the TouchPad with ported Android on it, it would have been great to see the 7 inch unit released.

We must also mention that the HP TouchPad Go tablet was supposed to use a IPS display with 1024 x 768 pixel resolution, a 1.5GHz dual core CPU and 1GB of RAM. 16/32GB of storage, stereo speakers and a front 1.3MP round up a specs list that’s 80% similar to the one of the larger TouchPad, but with improved features and a smaller format.

Previously codenamed Opal, the TouchPad Go would’ve been better than the PlayBook and most of the 7 inch slates on the market, including the Flyer, but now it will leave this task to the Amazon Kindle Fire… 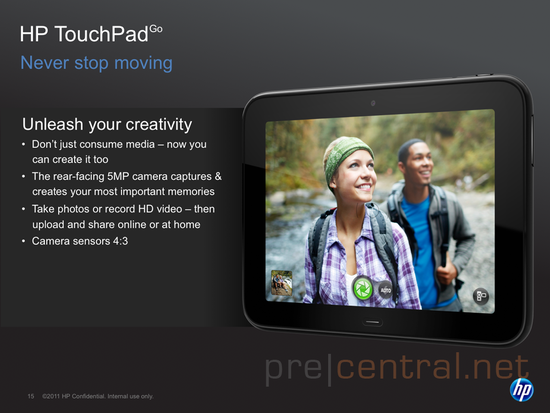