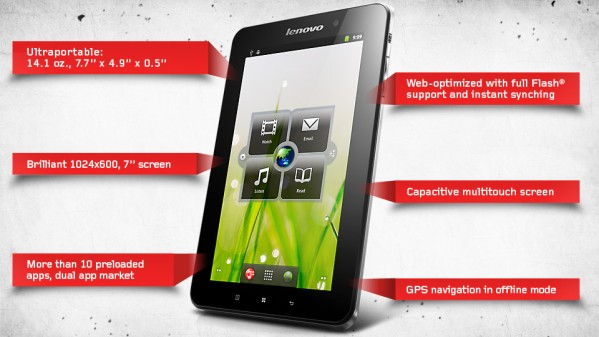 We’ve shown you Lenovo gear a while ago live from the Lenovo Do Tour 2011 event in Romania and now there’s a tablet out there with a pricing available. I’m talking about the 7 inch Lenovo IdeaPad A1, with Gingerbread and a price tag of $199.

This model was unveiled last month during IFA 2011 in Berlin and it’s the first attempt at a 7 inch slate from Lenovo. I’m puzzled that Android 2.3 is available here and not versions 3.2, considering how many Honeycomb tablets are available out there and the next Android is about to get released. Honeycomb 3.2 would have been gold on this slate, especially since it was created with 7 inch tablets in mind.

As far as specs go, you’re getting a 1024 x 600 pixel touchscreen, a 1GHz CPU, 5 megapixel main camera and 2 megapixel videocall camera upfront. 512MB of RAM, WiFi and Bluetooth are also found among the specs. The problem here is the very little internal storage, that’s a mere 2GB, but for $50 more you can get 16GB of memory. Shipping on October 27, this product is a pretty good HTC Flyer alternative.