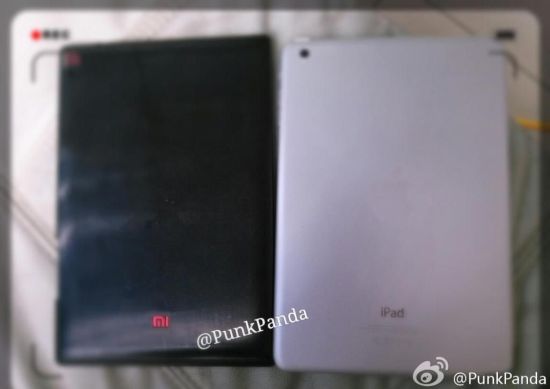 We’ve barely heard some rumors about the Xiaomi MiPad tablet just the other day and today we find its first hands on blurry shot, shown below. The device was leaked together with two other Xiaomi newcomers, two phones.

The slate is placed side by side with the iPad Mini, so it’s most likely an 8 inch or 7 inch product. Sources say that this model comes with a 7 inch screen, a shell made of polycarbonate and a variety of configurations. Rumors also mention a very affordable price tag of $160 or close. The tablet is supposed to rely on a quad core MediaTek MT8125 processor, a 13 megapixel camera and it will be released on August 16th.

The back plate of the tablet seems glossy and the product is also slightly curved, if my eyes don’t mistake me. Xiaomi has always delivered when it came to the last years’ devices, but will they make a dent in the market share of other cheap slate makers out there? Frankly, I was expecting a high end offering from them, but this one will have to do for now.