Toshiba’s got a cool thing going on, thanks to its dual touchscreen clamshell MID, known as Libretto W100. This dual screen device resembles Microsoft’s dead Courier e-reader quite a bit, but it’s a different product alltogether. It features two 7 inch capacitive screens and underneath the shell you’ll find a Pentium U5400 CPU and a 62GB SSD. Here’s the UMPC in action:

Libretto W100 runs Windows 7 and can be handled like a standard mini notebook, or as an e-book reader. Aside from the 1.2GHz CPU we mentioned, the Toshiba product features 2GB of DDR3 memory and supports WiFi b/g/n, Bluetooth 2.1+EDR and optional mobile broadband. Also on the specs list there’s an USB 2.0 port, a microSD card slot, a 1MP webcam and a battery with 3.5 hours of use.

W100 weighs 819 grams and uses an accelerometer for screen orientation. It’s interesting to notice that Toshiba has worked with the version of Windows 7 it had available in order to make it compatible with dual screen use. Thus, you’ll see different apps running on each display, use a screen to open documents and the other to browse, or other such multifunctional activities.

Virtual keyboards include a regular QWERTY input system, a simplified QWERTY and a split keyboard, all of them with haptic feedback via slight vibration. A major appeal of this product is the fact that its dual hinge mechanism is pretty resilient and the displays are bright, BUT… the touchscreens don’t come with multitouch support, sadly… 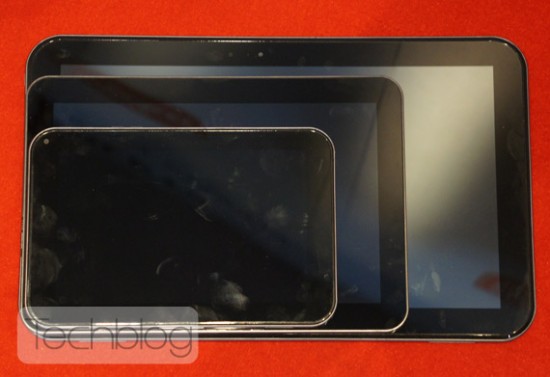