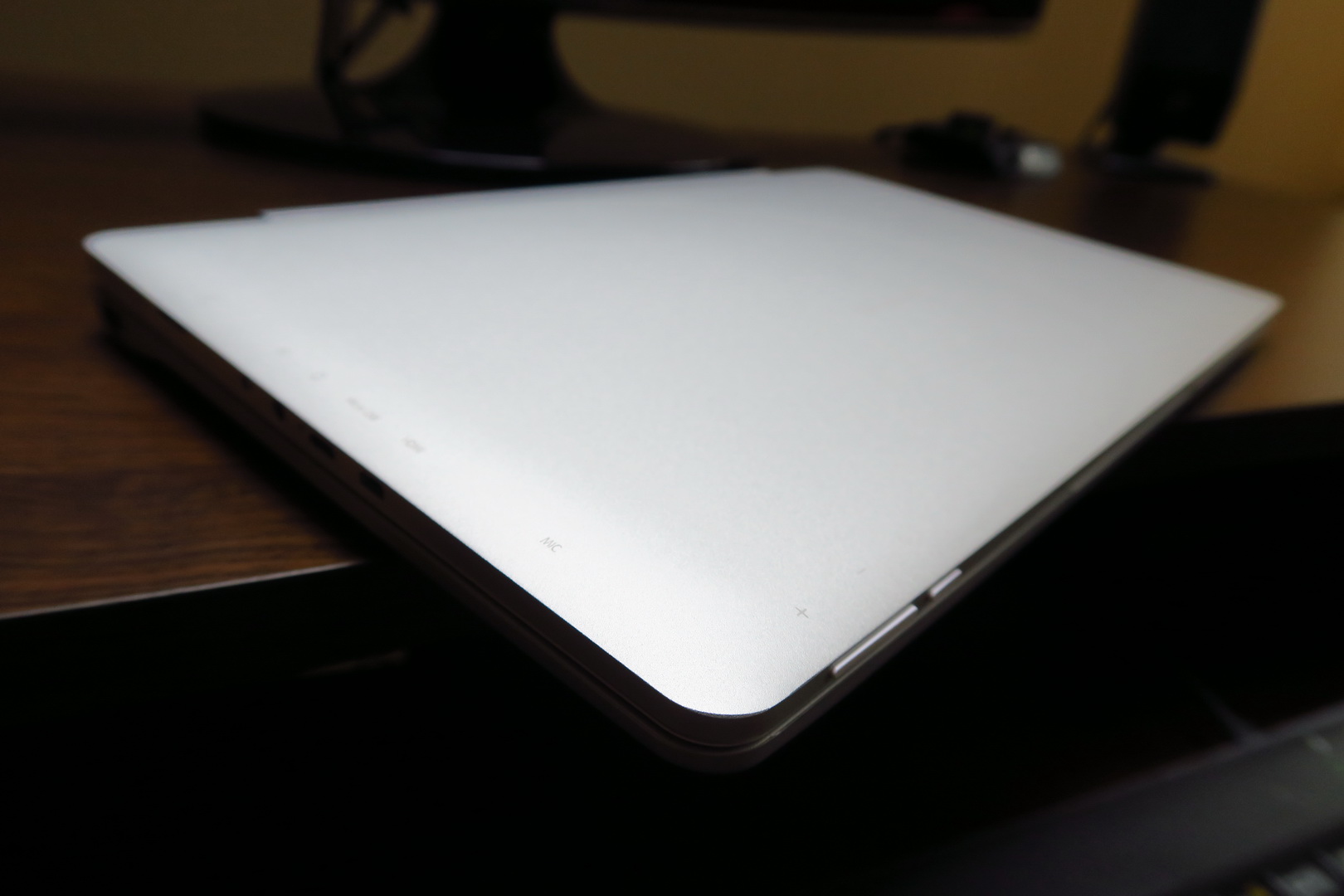 It seems that when it rains it pours, since after a “drought” of tablets we’re being treated to a series of two in one slates that should be able to replace notebooks with ease. After the Chuwi Hi12 and the Teclast X98 Plus II, today we play with the Teclast Tbook 16 Pro, tested in tandem with its keyboard, sold separately. The slate goes for $193 on GearBest, while the keyboard is sold for $39. 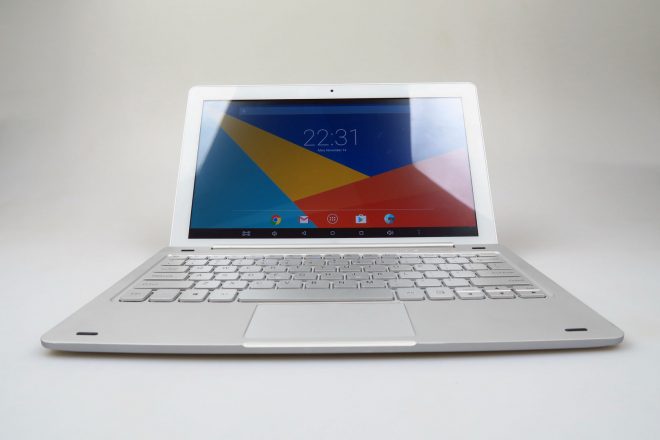 This 2 in 1 model is an 11.6 incher with a dual boot setup, based on Android 5.1 and Windows 10. As far as the design goes, this is a pretty massive unit, that feels like an unibody metal laptop lid of sorts. The lack of main camera also confirms this design feat. The device has a solid grip and build, a matte back and it’s quite heavy in the hand, at 772 grams. 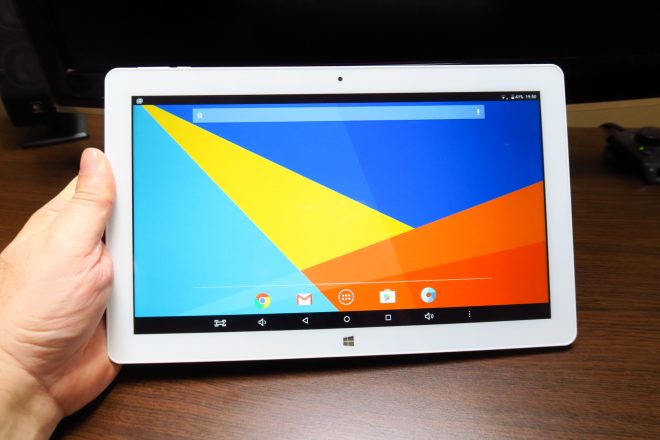 It’s got keyboard connectors at the bottom and the screen is easy to scratch or get dirty. On paper we are promised at 4.8 mm thick waistline, but in reality it’s more like 9 or 10 mm. This is a landscape-oriented model, that feels and look strange in portrait mode, so it’s best kept in the original format. As a point of reference, while this 11.6 incher weighs 772 grams, the bigger screened iPad Pro (12.9 inches) weighs 713 grams. 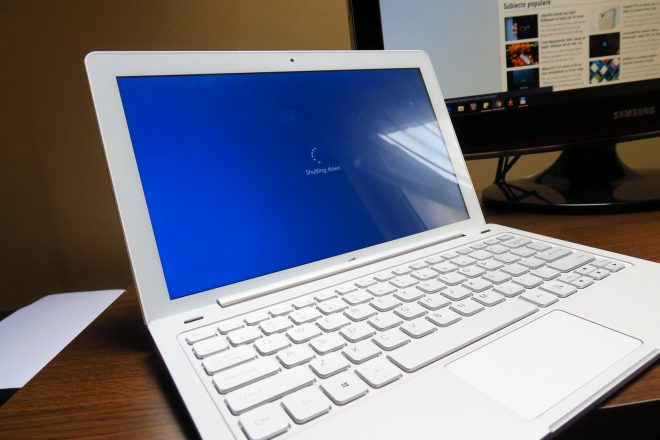 The keyboard itself is quite hefty, at 675 grams, but it’s made of plastic. It has the advantage of two full USB ports and it’s built pretty OK. It’s got rubber feet, for extra grip on flat surfaces and it comes with a rotatable hinge. It reminds me of the ASUS Transformer Pad keyboards, through its design and styling. It’s comfy to type on and also uses a magnetic system aside from the latches to attach to the tablet. Still, both models make one heavy notebook replacement…

On the display front, we’re being treated to an IPS LCD with a 11.6 inch diagonal and Full HD resolution. There’s also a pretty OK choice of video playback solutions here, with a Moli Player with extra options, like loop, frame subtitles and more. We preferred to rely on the Gallery for that purpose and found that the screen shows OK calibrated colors, wide view angles, but the contrast is mediocre and brightness is rather poor. 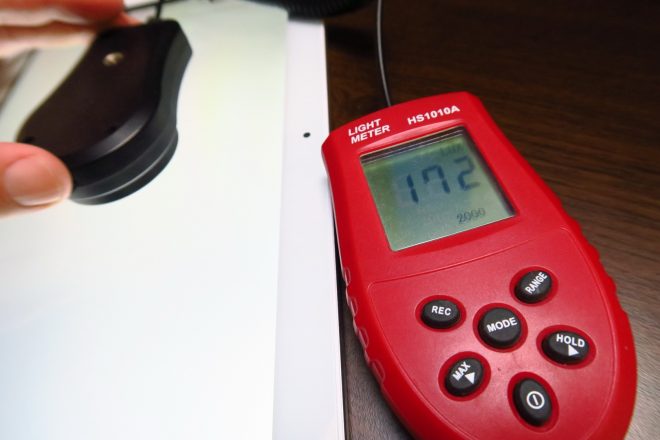 Still, indoors brightness will serve you reasonably. Forget about using the device outdoors, though. Pixels have an RGB Stripes setup, which appears distorted under our microscope, on account of the protective layer on top. The brightness level we measured is 172 LUX units, which is rather weak, but at least it beats the Teclast X98 Plus II and its 119 LUX, or the Chuwi Vi8.

We also scored below the Cube i7 Remix and Xiaomi Mi Pad 1, in case you want to know. On the Settings front there’s brightness to tweak, font size and we also have the Intel Smart Video option, for smoother video playback. Overall, a weak screen unless it’s used indoors. Moving inside the Teclast TBook 16 Pro, to see what makes it tick, it’s a quad core Intel Cherry Trail Z8300 CPU, clocked at 1.84 GHz and using 14 nm technology. 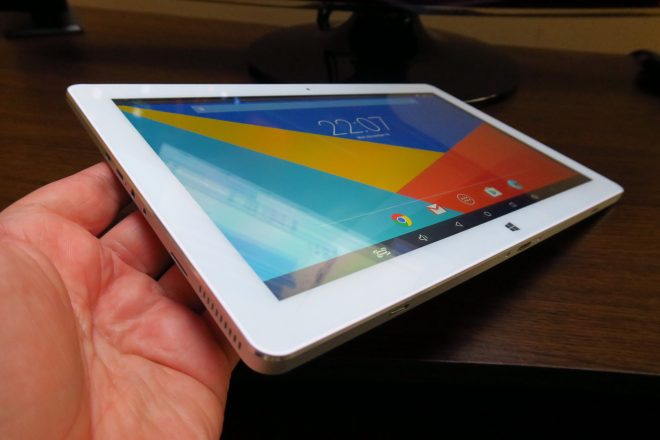 It also offers Intel Gen 8 HD Graphics, 4 GB of RAM and 64 GB of storage, as well as a microSD card slot. There’s 17.7 GB of storage available out of 36.9 GB on Windows and about 12 GB out of 16 on Android. As far as performance goes, while the Android experience was pretty lag-free, Windows 10 did bring a bump or two. However, gaming was no problem and Riptide GP Renegade ran pretty OK.

As far as the benchmarks are concerned, we scored above the Chuwi Hi12 in Quadrant, but still the score was modest, twice lower than the Nokia N1. In AnTuTu 6 we beat the Cube i7 Remix, also the Chuwi Hi12, but scored below the Teclast X98 Plus II, which is not much of a compliment. 3DMark Ice Storm Unlimited brought a score above the Samsung Galaxy Tab S2 9.7, possibly the only consolation from these tests. 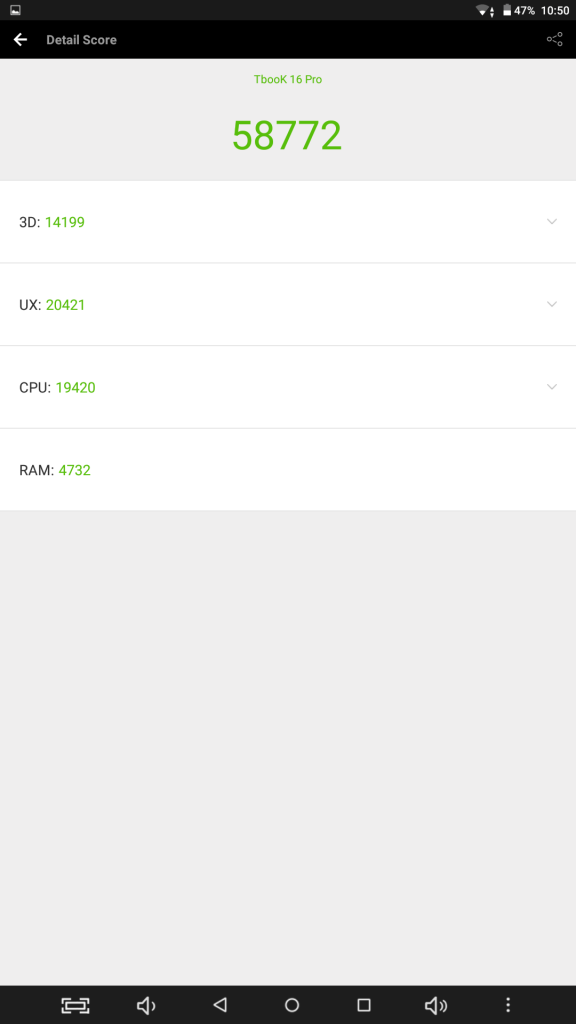 Temperature was also fine, reaching 34.9 degrees Celsius after running GFXBench and 35.3 degrees after playing Riptide GP Renegade, so there’s no overheating here. Performance is more of a so-so affair. Time to discuss the battery, in this case a 7200 mAh, 3.7 V unit. The keyboard meanwhile comes with a special option, that makes it go into sleep mode after 10 minutes of lack of input. 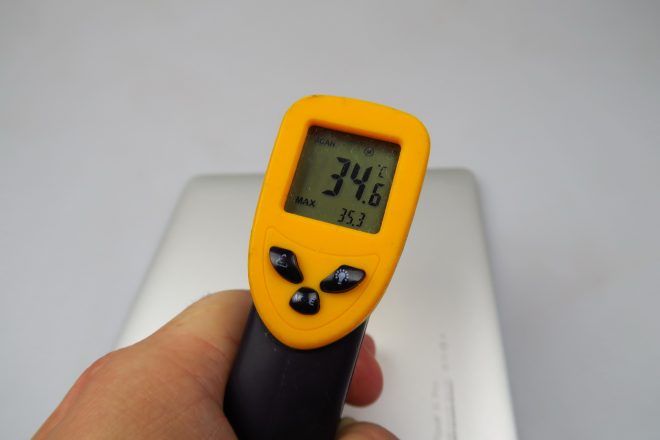 We proceeded to do a HD video playback test and achieved 5 hours and 20 minutes of playback time, which is basically two superhero movies one after the other. It’s not very impressive, but at least it’s superior to the result of Onda Obook 20 Plus, or the Cube i7 Remix. In PCMark things got really underwhelming, with 2 hours and 41 minutes of continuous usage simulation.

This is the second worst result from all the tablets we’ve tested and you can basically see the percentage of the battery draining in front of your eyes. It’s even below the Teclast X98 Plus II, which at least got to 4 hours and 28 minutes. Sadly, the charging is also long, at 4 hours and 8 minutes, although we did use a charger from another device to juice up this model, having not received the official charger. 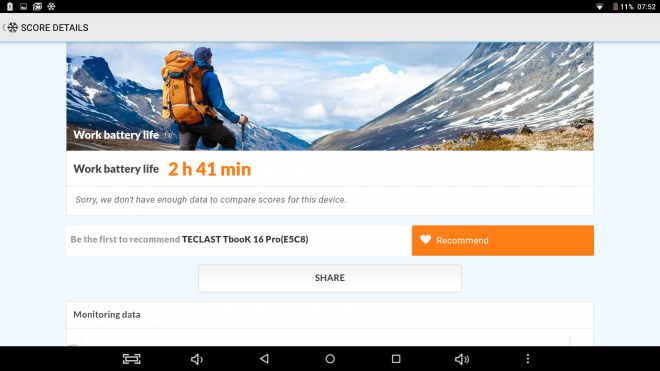 The charging time is though superior to the one of the Chuwi Hi12. Settings for Power Saving are rather typical on Windows 10, the same you’d find on a Windows laptop, while on Android we have the usual Battery Saver function. Time to see, or better said hear, what the stereo speakers on board hold. We use Groove Music on Windows 10 or simply Music on Android, but there’s also an app called Music Player, that gives you a custom EQ, with 5 channels and Bass Boost.

The basic Music app also brings 5 custom channels and music genre settings. There’s also a big problem with this device: the speakers suddenly stop working every once in a while, for no clear reason. The listening experience brought us OK volume, a clear lack of bass and in general well reproduced dialog in movies. The high notes are also heard OK. 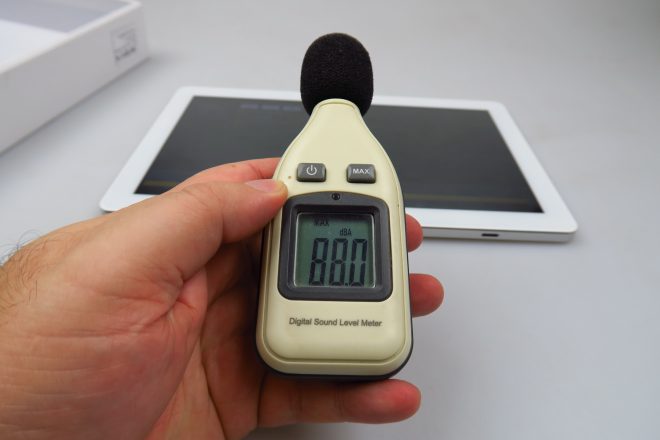 We used a decibelmeter to measure the strength of the sound and got to 85.4 dBA with our usual sound test sample, while in Riptide GP Renegade we got to 88 dBA. This means we beat the iPad Air 2 and at the same time scored below the Nokia N1 by 1 dBA. This is a solid result and we also have to mention that we’re getting virtual volume buttons here aside from the physical ones.

On the camera front we really have nothing to mention, since there’s no main camera, but there’s a 2.1 MP webcam upfront. Its Android app offers a timer, grille and that’s it. It can also do 720p video and it’s OK more for grainy videocalls rather than anything else. In Windows 10 the app is more generous, with white balance options, ISO, shutter, exposure and digital stabilization. Nothing to write home about. 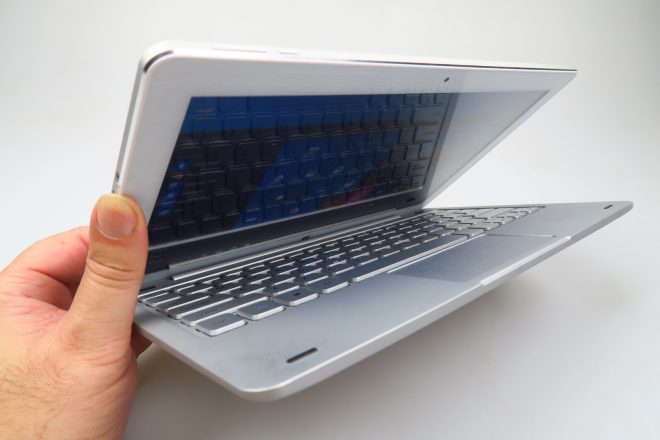 We also tested the web browser and on Android we used the preinstalled one and Chrome, with a so-so speed. Microsoft Edge was sometimes faster, but it wasn’t constant and it was prone to some app lag. The virtual keyboards are quite comfy, with a small plus for the Windows one. As far as connectivity is concerned, there’s WiFi b/g/n here, Bluetooth 4.0, we get a microUSB port and micro HDMI with special options. 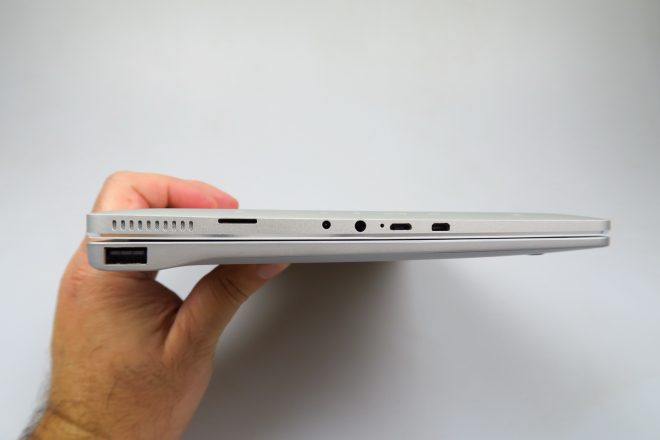 There’s a DC port for charging and audio jack, plus Teclast bundles an USB OTG cable. It can be used to attach mice, USB drives and HDDs maybe. The keyboard also throws in two full USB ports and I find it odd that the tablet itself has none. We also did a WiFi SpeedTest and achieved up to 48 Mbps in download and 25 Mbps in upload, results that are reasonable but not groundbreaking in any way. 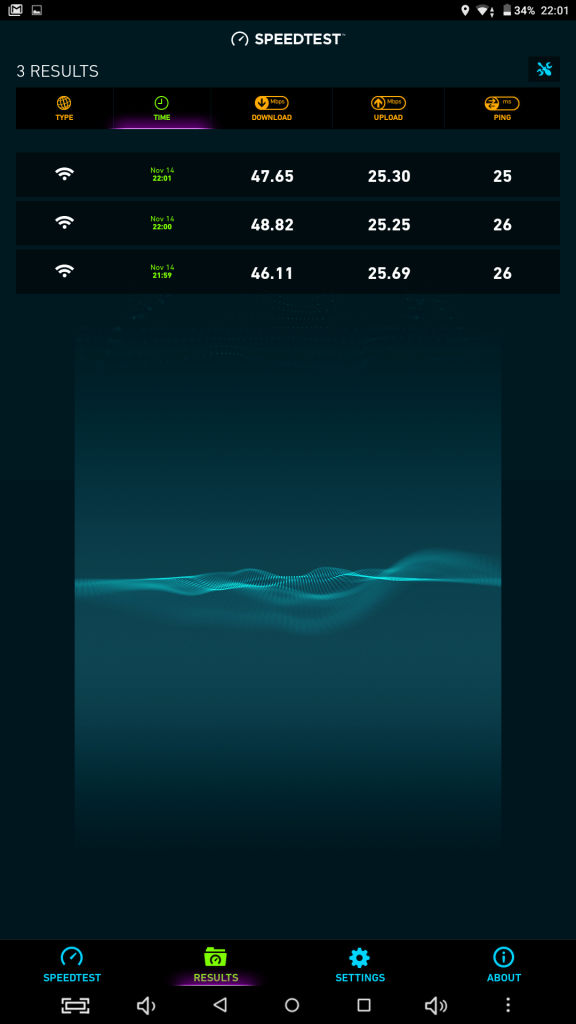 Now off to the software bit and here we’re dealing with Android 5.1 Lollipop and Windows 10. You can switch between them at the press of the button and the switch happens much faster than on the Chuwi Hi12 or the other Teclast tablet. On Android there are lots of virtual buttons, I mean extra ones, for volume, screenshot or contextual menu for example.

The widgets are stock here and the dropdown section is also stock, with Quick Settings and notifications. The multitasking is done via the usual carousel. The preinstalled apps are about 20 or so, with a few extras like Ifenew News, Baidu, or CleanMaster, but keeping the experience clean in general. There’s also Teclast OTA and UC Browser, but luckily you can uninstall most apps. 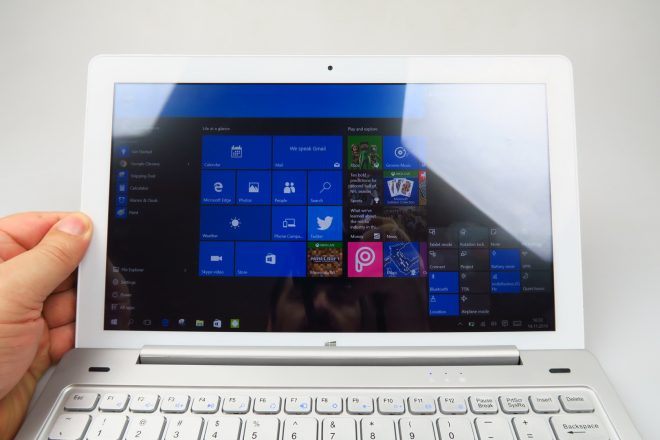 On Windows 10 we get to play with x86 apps, install .EXE games and we get the usual Tablet Mode, plus we get to play with Skype, Excel, Cortana, Word, the works. We also showed you how comfy the keyboard accessory is, since its keys have good feedback, but the trackpad is a bit grippy and kind of slow. Overall, the keyboard made a good impression on me and I’d see myself writing on it daily.

Now it’s time for the verdict, so let’s see what this Teclast tablet gets from us. 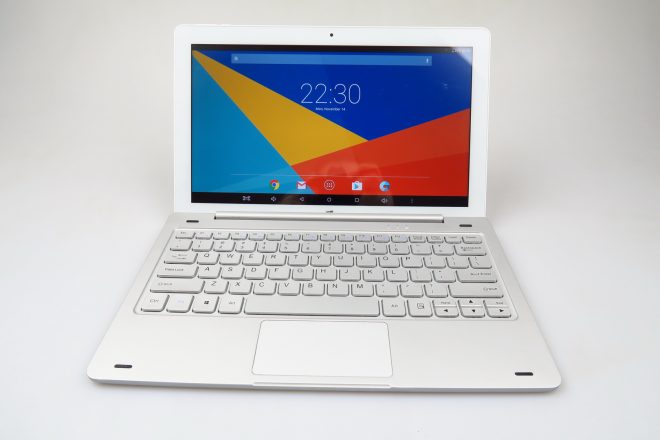 The Teclast TBook 16 Pro is a solid tablet if used to watch a couple of TV shows and do some work in Excel and Word, plus casual gaming on Android. It’s a massive tablet with a massive keyboard, which decreases its portability. The battery is a problem that also makes you want to stay close to the charging station. One thing going for it is the fast OS switch and of course the comfy keyboard is also a plus. 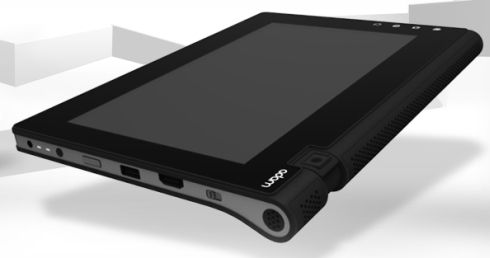