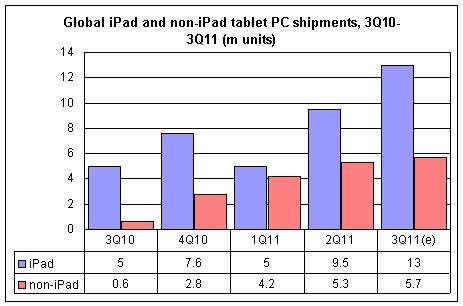 Global tablet PC Shipments have been struck by the weak global economy after August and the left over units from this summer. Thus, the shipments reached 18.7 million units in Q3, a 27.5% increase sequentially, a lot less than the previous 60.9% sequential growth.

The info comes from Digitimes Research senior analyst James Wong, saying that Apple’s iPad shipments in Q3 have only reached 13 million units, a growth of 36.8% sequentially. This is under the initial predictions for iPad sales, so even Apple was affected by the global economy. Meanwhile, the non-iPad tablet PCs had very high inventories in Q3 and many new tablets have been delayed, so everything’s not at all peachy.

The non iPad tablets only grew a mere 10.1% sequentially in the quarter and if you’re interested in how the upstream component suppliers performed know that Nvidia has become the second largest supplier. Texas Instruments is now fourth largest and as far as ODMs go, Inventec is the second largest now, while Quanta Computer is fifth.