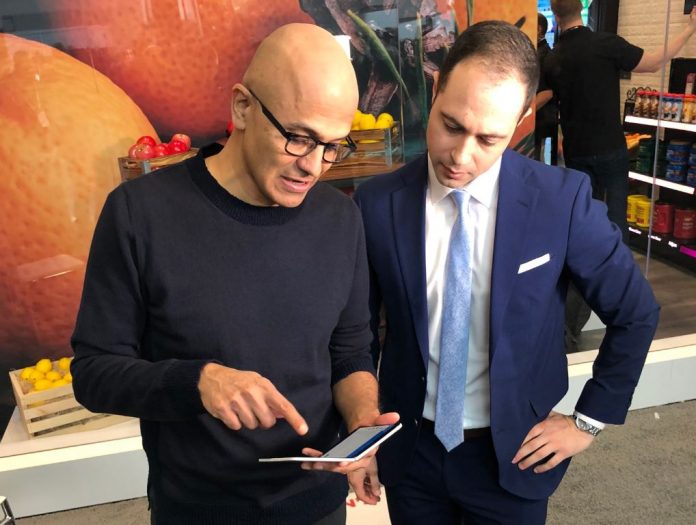 Microsoft’s last big hardware event was in October 2019 and they unveiled there a series of appealing devices, like the Surface Duo, Surface Pro 7, Surface Neo and more. The Surface Neo and Duo were prototypes if we’re being honest, with very late launch dates: end of 2020. Now we’ve seen a photo of Satya Nadella, Microsoft CEO, using a pre-release version of the Microsoft Surface Duo.

The Surface Duo is the reincarnated version of the Surface Phone, which was the subject of leaks for a long while, especially when Nokia’s fate hung in the balance, under Microsoft’s wing. The Surface Duo packs a pair of 5.6 inch displays, hooked up with a revolutionary 360 degree hinge, that will lend itself to multiple use modes. Satya Nadella already admitted he was using both the Surface and Neo late last year, praising the pen-focused experience.

He claims it was an improvement over touch-first devices and really offered a proper replacement for paper. Annotation is particularly comfortable and well done. The new photo was snapped in a public place and Brian Sozzi, Editor at Large of Yahoo Finance was there to see the device in action. The product is still coming during the holiday season of 2020. We expect a hefty price, around $1500 or so.

It’s not very clear if there will be 5G on board or not, but we don know that a Snapdragon 855 CPU is inside. A potent “world class camera” has been teased by Microsoft, even though a camera didn’t even appear on the device in the first renders or pictures. I expect 8 GB of RAM inside, a Windows 10X platform tailor made for the newer formats, plus an 8+ inch screen when opened up.