Samsung Galaxy Tab S6 Lite has been leaking a bit too much lately, if you ask me. Now it even has a release date and a price, courtesy of Amazon Germany. Turns out the newcomer will be available on April 2nd and the LTE version of the machine will be priced at 430 euros.

There will also be a WiFi only version, a cheaper one, but odds for a 5G unit are pretty slim. Amazon also published a specs list for the device, which fits exactly what we’ve seen so far. Samsung Galaxy Tab S6 Lite is going to have a 10.4 inch screen and it’ll come with support for the S-Pen stylus. We don’t have any idea about the screen panel it will use, but a LCD is more likely than an AMOLED. The Exynos 9611 is also on the list, just as leaked before. By the way that CPU was present on the Galaxy A50s and Galaxy A51. 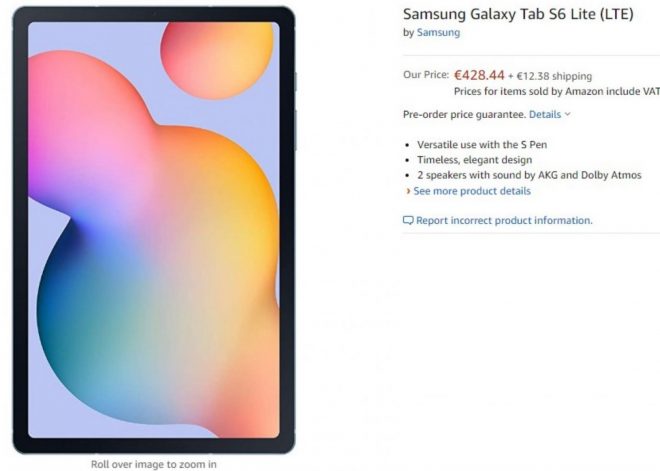 It also has 4 GB of RAM, a 26.34 Wh battery and it measures 7 mm in thickness, plus it weighs 798 grams. There are two speakers on board with AKG tuning and Dolby Atmos support is also here. Expect an unveiling this Thursday, April 2nd, at the latest. There’s been a number of leaks for this device, going from a Bluetooth SIG certification to a certification in Taiwan and one in USA via FCC. Then we even had Netflix certifying the device, for its HD streaming.

We also expect a microSD card slot on board, a 5 MP front camera and 8 MP front shooter. Expect to have Android 10 here with One UI on top, as well as a 7040 mAh battery. It should go against the cheaper 10 inch iPad from last year, or maybe even a surprise new cheap iPad from the Fall. One may even see it as a Galaxy Tab S5w follow-up.