It’s been so long since I’ve unboxed and reviewed a tablet, that I can’t even remember when it was… Anyway, here we are with a fresh new device to play with, the Samsung Galaxy Tab S5e. It’s the lightest and slimmest tablet around right now, with 4G in the mix and an incredible weight of just 400 grams. It’s priced at $400 and you can watch it get unboxed below.

First of all, this isn’t your typical unboxing, since I’ve already played with the device for a few days. I found that it’s very easy and comfy to use even with a single hand. It’s also made of aluminum and in spite of the 5.55 mm waistline, it feels solid. Still, there’s the fear of a Bendgate in my mind… It has those old school antennae cutout at the top and bottom of the back side and it provides good grip. 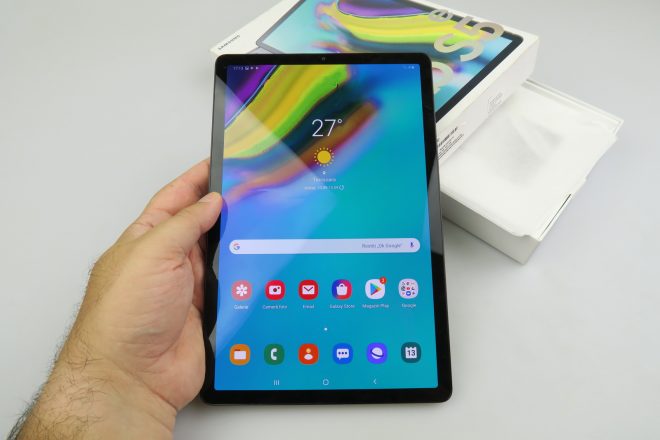 I don’t think the fingerprint scanner inside the Power button is a good idea, since it’s to thin to press properly. Anyway, inside the box we find the charger, USB-C cable, manual and a metal key, plus the adapter from USB-C to audio jack. This pretty much tells you that you don’t get an audio jack here. The device has a 10.5 inch display, of the Super AMOLED variety and with a 2560 x 1600 pixel resolution. 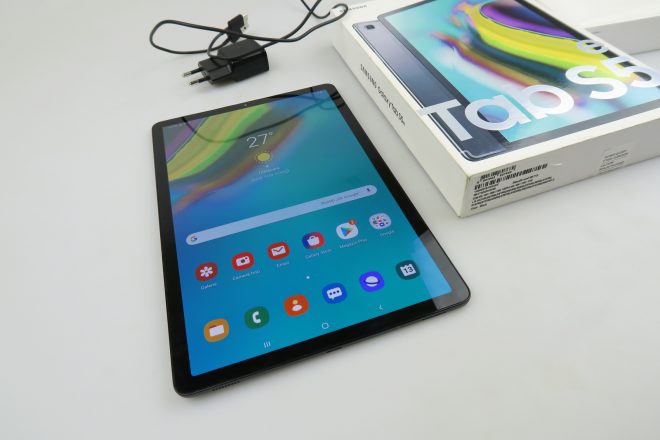 It’s very bright and crisp and Netflix plus games looked fine on it. Also, the contrast was excellent, since I took the device outside for a spin and some pictures. Inside we find the Qualcomm Snapdragon 670 octa core midrange CPU, plus 4 or 6 GB of RAM and 128 GB of storage, plus microSD. There’s also a 7040 mAh battery and after 3 days of rather casual usage, I have yet to charge the battery. 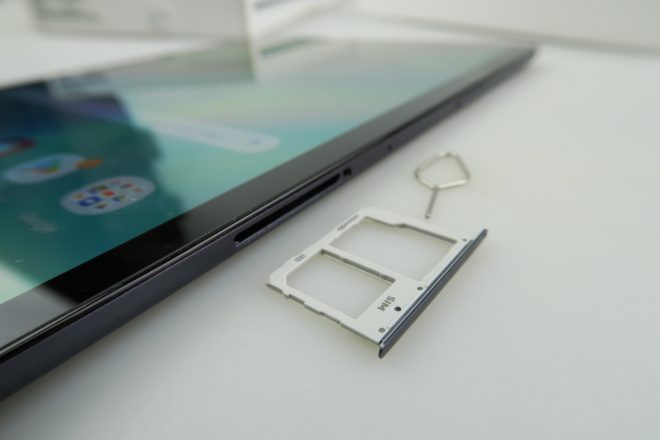 One of the selling points is the selection of quad speakers with AKG tuning and stereophony available here. They sound pretty punch, in Asphalt 9 and some action movies. The cameras aren’t half bad for a midrange tablet, with a main 13 MP shooter with 4K video capture and an 8 MP camera upfront that’s more for Skype than selfies. There’s even a Live Focus/Bokeh option. We also have GPS and 4G LTE in the mix, plus USB-C, ANT+, WiFi dual band and Bluetooth 5.0.

Bixby is only available as a homescreen aggregator on the leftmost side. This is the first device with One UI that we see, applied on top of Android Pie and it also brings a Night Mode, DeX functionality and a minimalistic and clean experience. Almost forgot to mention we also get a Smart Connector for the keyboard on the side, to boost productivity.

We’ll be back with a full review, but I’d say that so far so good! You can get the device here.