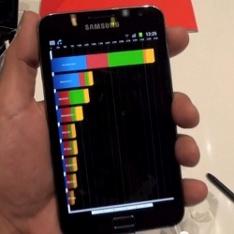 The Samsung Galaxy Note, a tablet/smartphone unit that fits inbetween these categories turns out to be a pretty well performing device. The first Quadrant benchmark tests have shown impressive scores, such as 3,624 in the popular analysis method mentioned before.

The reason for this performance is most likely the dual core 1.4GHz processor with Samsung branding and as usual, great behavior on this in-house device. The folks of Techblog.gr were the ones testing the Galaxy Note in Quadrant and compared it to the Galaxy S II, showing the upper hand of the newcomer with a 5.3 inch display.

Galaxy Note was initially not supposed to come to the US, but maybe there’s a chance for an Stateside launch after all, especially if Apple doesn’t sue Samsung again. The UK public will get the handset in the first quarter of the next year, if everything goes well. The question here is: will you buy a Note?