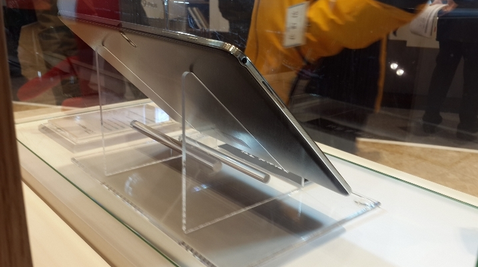 Samsung Galaxy Note Pro, the much talked about 12 inch slate that Sammy is preparing for a big launch next month has finally leaked and you can see the device shown below. The Galaxy Note Pro is said to be a 12.2 inch slate, that already visited the FCC apparently.

This model was rumored to pack a 2560 x 1600 pixel display, a quad core Snapdragon 800 processor and 3 GB of RAM, so pretty much the same specs as the Galaxy Note 10.1 2014. We should also get 32 GB of storage, an 8 megapixel back camera and 2 megapixel front shooter, while Android 4.3 will be preinstalled.

We’ve seen a render of the Galaxy Note Pro before, but this one looks like a solid hands on shot and it doesn’t seem taken in a factory, but rather in a showroom of sorts. Now there’s a new theory saying we should expect Android 4.4 KitKat to be on board and a 9500 mAh battery to be integrated. The device could be displayed at CES next month in Vegas.