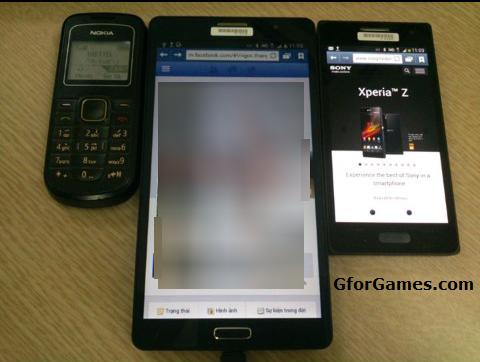 Last week we had a batch of pictures of the Galaxy Note 3 appearing on the web and now the same device gets pictured again, compared to two handsets. This is supposed to be a prototype and it looks the same as the leaks from last week, so at least we have continuity.

The device is said to pack a 5.99 inch Super AMOLED display, but the image above makes me think of a bigger diagonal, perhaps 6.3 inches, as it was previously mentioned in the first Note 3 leaks. This device will be unveiled at IFA 2013 in Berlin, taking place at the end of the summer and it’s supposed to bring us a new S Pen stylus and an 8 core Exynos 5 Octa processor.

Other than that it will keep the camera of the Galaxy S4 and probably much of its software features and gestures. I also expect the Galaxy Note 3 to be the first device to make the jump from 2 GB of RAM to 3 GB. Anyway, we’re only dealing with a prototype right now, so we can only speculate on features and design.