Samsung’s foldable phone has been floating in the news for a while now and today we finally get to see 3D renders of it. They were created by LetsGoDigital from the Netherlands and they’re probably the most realistic creation related to the future device we’ve seen.

Last week Sammy showcased a prototype of its foldable device screen, tentatively known as the Samsung Galaxy F or the Galaxy X for a while. It was showcased during the Samsung Developers Conference in San Francisco and it was well covered with a special case. We only saw the screen and supposed how the hinge would work. In the meantime we learned that Samsung could be working on more such devices, including a larger diagonal tablet and even launch one foldable per year. 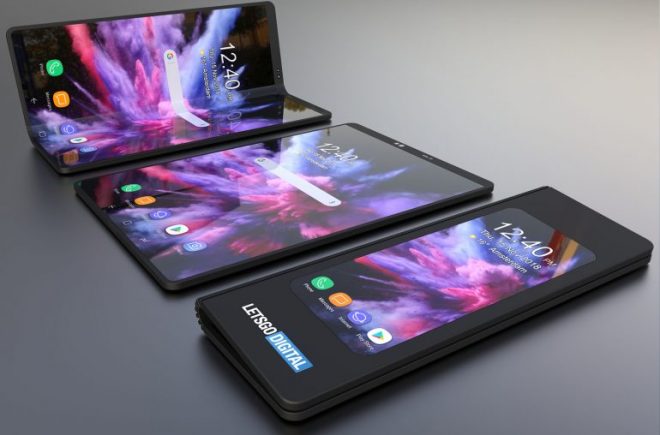 These new 3D renders reveal a device that indeed looks like a 7.3 incher and it folds to become a 4.5 inch smartphone that’s very narrow. On the facade the seam/hinge is invisible, while on the side we have a mechanism that feels like a throwback to the Microsoft Surface Laptop or Lenovo Yoga Book. The device is expected to use a flexible AMOLED with a 1536 x 2152 pixel resolution as the main panel and each 4.6 inch screen is said to offer a resolution of 840 x 1960 pixels.

You will move content around the screens and keep working on one part of the display after starting work on the other. It’s very likely that we won’t see attempts at a flexible motherboard or battery, like the LG G Flex tried, but rather two split batteries and motherboards. Expect a CES 2019 or MWC 2019 release and a price above $1500.