I can only envision one category of people who buy the Lumia 1320 from Nokia: gamers on a budget. Let me explain. They’re teens, they like to swap the back of the case of their devices and they want to play the latest game on a cool looking device with a big screen. Nokia Lumia 1320 may just be it.. or not.

This is a 6 inch affordable phone, that was announced back in October 2013 and it was launched in January 2014. It’s priced at $360 on Amazon and its design involves a removable back cover that extends to the sides of the device. This plastic layer feels a bit cheaper than the polycarbonate of the Nokia Lumia 1520 or the Lumia 1020. It’s also slightly slippery and tends to creak a bit…

The device measures 9.8 mm in thickness and weighs 220 grams, so it’s pretty massive, especially since it has a 6 inch screen. This handset has plastic buttons on one side, with good feedback, while at the top we find the audio jack and at the bottom there’s the microUSB port. On the back area we find the speaker, camera and flash, while upfront there’s the screen and below it the capacitive buttons.

This model is made of polycarbonate and it has a typical Lumia design, meaning we get a rectangular and slightly rounded case. We’re dealing with a fingerprint resistant device and overall the design is OK for this price. On the hardware side, we’re dealing with a 6 inch IPS LCD ClearBlack screen, that can show 16 million colors and supports a 1280 x 720 pixel resolution. We’ve got Gorilla Glass 3 on top of the screen and inside the phone there’s a Qualcomm Snapdragon S4 Pro CPU, a dual core 1.7 GHz unit.

These are Krait 300 cores and we also get an Adreno 305 GPU, 1 GB of RAM and 8 GB of storage. There’s a microSD card slot in the mix as well, supporting up to 64 GB in extra storage. At the back there’s a 5 megapixel camera with LED flash, while upfront we’ve got a VGA cam for videocalls and such. On the connectivity side we get quad band GSM/GPRS/EDGE, HSDPA with a download speed of 42 Mbps, LTE, Bluetooth 4.0, microUSB 2.0, WiFi dual band, GPS, Glonass and a microSIM card slot.

The Lumia 1320 provides active noise canceling, an accelerometer, gyroscope, proximity sensor, digital compass and a non removable Li-Ion 3400 mAh battery. This battery provides 25 hours of talk time on paper or 98 hours of music. In our test we achieved over 17 hours of HD video playback with medium brightness and WiFi on. That’s very good, as is the charging time of merely 2 hours and 10 minutes. So, overall the battery is stellar.

Moving on to the acoustics, the speaker at the back is small and has a good volume, but the voice in the songs is not very clear. Also, the bass is not strong and I feel a slight bit of distortion in songs that have guitar in them. The headphones bundled here are not the high end ones of the Lumia 920, Lumia 1020 or Lumia 1520, but rather the cheap ones of the Lumia 520. They have a slightly muffled sound and also there’s a slight echo thing going on.

Overall, the audio was a bit of a letdown here, as you can figure out. At least we’ve got FM radio, Dolby settings, and an EQ in the same settings area. Proceeding to the screen/video, I have to say that this IPS LCD 720p unit offers a 245 ppi density and its ClearBlack tech means that there’s a polarizing filter that decreases the glare. It supports glove input and offers vivid colors, wide view angles and it’s pretty bright. In our test with a luxmeter, this screen achieved 368 lux unit, which is pretty high even for a modern phone.

This is screen with RGB Stripe pixels, good contrast and we’ve also got some special settings to tweak our experience. Those include increased sunlight readability, Lumia Color profile for messing with the color temperature and saturation. Overall this is a pretty good display. As far as the camera is concerned, this 5 megapixel shooter takes shots with a max resolution of 2592 x 1936 pixels and the standard camera app offers options like ISO, Scenes, exposure, white balance, aspect ratio and Lenses.

However, you can also use the Nokia Camera app, with its nifty interface that involves overlapping semicircles, highlighting various settings, options of features related to your camera. Those include white balance, ISO, shutter speed, focus mode, exposure and flash. There’s no HDR for this camera, but we’ve got bracketing, that takes a series of shots with a variety of exposures. Then there’s the Smart Sequence option, that takes a series of burst shots and then allows you to remove a moving object, change faces, choose the best shot and add some motion blur.

This camera has a F/2.4 aperture like the Nokia Lumia 1520 and its samples offer good colors, also realistic, but a bit colder than usual for a Lumia. This is one of the best 5 megapixel cameras I’ve seen, if not the best, even beating some 8 MP shooters on Android midrangers. The picture brightness is good and we’ve got a decent level of detail. We’ve got nice indoor pics, like those with the cocktails and a bunch of closeups to confirm the quality.

Contrast is good and there are a lot of apps/Lenses to play with. By the way, the sensor here measures 1/4 inches and it has a good dynamic range. On the video side, we’ve got Full HD 30 FPS video capture, also 720p and a too sensitive autofocus, that can be turned off. Clarity is good, but stabilization is poor. When filming colors are accurate and contrast is good, but there’s the occasional blue hue on top. Keep in mind all of these samples were taken on a cloudy day!

When gaming on this device, we achieved 39.8 degrees Celsius after 15 minutes of playing Asphalt 8 on it, so yes, it kind of gets overheated a bit. Well, at least it runs the likes of Asphalt 8 and other new games without flaw and it also it has no lag. Nokia Lumia 1320 offers good call quality, good volume and a good signal, so everything’s OK in here as well. The web browser is reasonably fast and the virtual keyboard is comfy, although a special one hand use mode would have been good and a way to make the keyboard smaller in a corner of the screen.

In GFXBench we scored 3.9 FPS, which is not far from the iPad Mini’s 3.5 FPS. Finally, in Phonemark we scored 1362, which is quite a bit over the 960 points of the HTC 8X. Overall, the benchmarks are good and we beat the Lumia 1020 in all the categories, so that’s impressive. The OS here is Windows Phone 8 GDR3 Lumia Black Edition, that features among other the option to double tap to unlock, multitask windows with X to close in the corner and a screen rotation option.

We’ve got the famous Glance Screen with a night mode included, a Driving Mode, Kids Corner and all that. The preinstalled apps on this device and the ones we can install from the Windows Phone Store make for a pretty impressive list. Those include the App Highlights, that suggests cool apps to you and those that would be ideal for your device. As usual, we’ve got the Here Drive app with turn by turn navigation and a find my car mode, plus 3D graphics and the option to download maps offline. 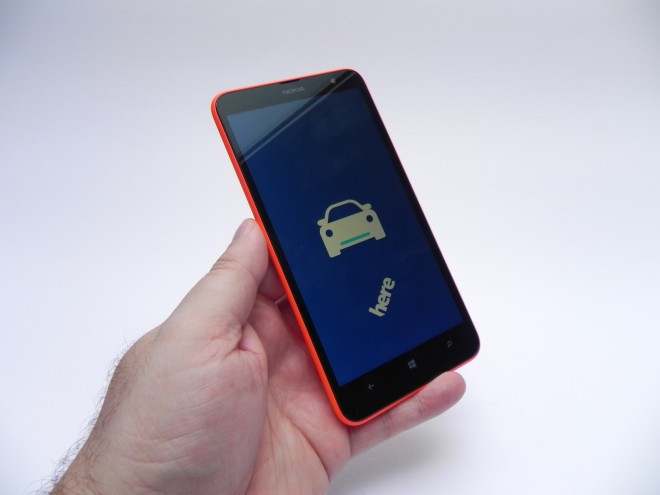 You need a SIM to make that work, by the way. There’s also HERE Maps, with a rich list of landmarks to look into. There’s Nokia Beamer that beams content up from your screen to other devices, Cinemagraph to create GIFs, Creative Studio to edit photos and Glam Me to edit your selfies in real time and smoothen your skin. Nokia Music, Nokia Refocus and as usual Office from Microsoft complete the list. You already know most of these apps, so there’s no point in detailing them again.

Office allows you to play with Excel files, Word files and Powerpoint presentations on the phone easily. And now let’s see the Pros and Cons of this smartphone.

perfect battery
good display
a ton of camera options
the best 5 MP camera tested by me
runs new games
a ton of Nokia apps, all good
no lag

And now for the grades: the Lumia 1320 gets an 8 out of 10 for design, an 8.7 out of 10 for hardware and 8.5 out of 10 for OS and UI. The final grade is 8.4 out of 10 and the good price is a major aspect to take into account here. This $360 phablet’s only downfall are its audio and lack of games, plus the design a little bit. This is very much a cheap gaming device with not enough games to play on it.