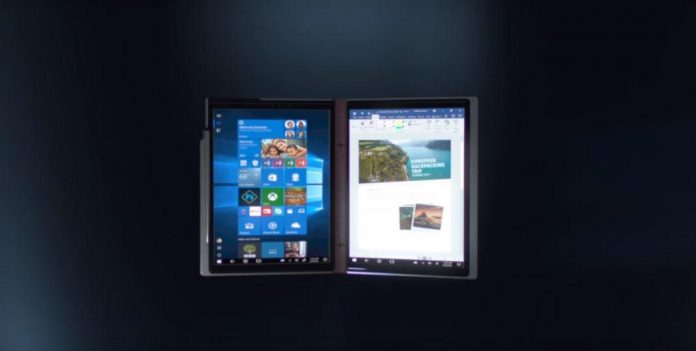 We keep hearing about Microsoft making a folding Surface device and now we’ve got fresh intel on that, coming from a reputed analyst. The same source also talks about a folding iPad. We dissect the info after the break.

At the end of June there was info online from analyst company IHS Markit that Microsoft was working on a dual screen tablet/laptop hybrid. It was said to be a 9 inch device with 4:3 aspect and it actually included two 9 inch screen panels. There was talk about Windows Core OS, dual display UI and always connected via 5G. An Intel Lakefield CPU would be inside and even Android app support was on the table.

Now we have extra info about the Surface device, with a resolution of 1920 x 1440 pixels in the cards and a PPI of 267. The UI would support Book Mode. The device will hit the market in Q1 or Q2 2020 and Microsoft expects to sell 30k to 40k units per month. Interestingly, the source also talks about a folding iPad, that could come up as a rival.

It’ll have an Apple A Series CPU, and it was hinted at by Jeff Lin, Associate Director, Consumer Electronics at IHS Markit. The same Lin claims that Apple will make a device with a MacBook display size, but more on the go, with iOS/iPadOS in the mix. The foldable and 5G parts will be tricky to solve, so we may have to wait a bit more. In the meantime the codename Microsoft Centaurus seems set for the Microsoft Surface foldable.