And here’s your daily batch of iPad Mini rumors, this time with the information that the device will launch next month with the iPhone 5. The folks of Apple.pro have the scoop this time, with some pics available below. They don’t say much about the device, but what they do say is that they got the pictures from Chinese social networking site Weibo. 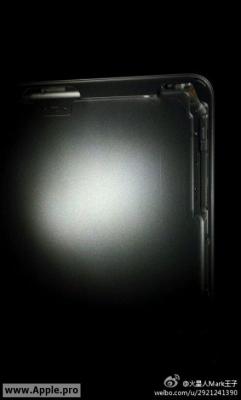 The device is still a 7.85 inch unit and the surprising thing here is the lack of back camera. This means that Apple is set on competing with Google Nexus 7 and the Kindle Fire, that sacrificed their back camera for a lower price tag. I’m pretty suspicious about the whole unveiling with the iPhone 5, since the new iPhone would certainly steal the spotlight from the new iPad. The guys from Apple.pro also confirm the 19 pin connector dock, to replace the 30 pin interface.

This is the first time that an iPad Mini leak lacks a camera, so I’m very suspicious about it. That’s why I advise you to take it with a big old grain of salt and maybe we’ll see a video of the device in the following days… Fingers crossed for that!