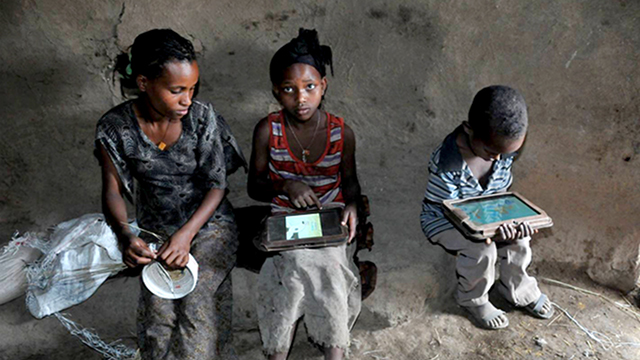 As dramatic as it may sound, kids in Ethiopia lack just about every basic accommodation every kid should have. It’s a poor territory, where roads don’t exist and people struggle to find shelter and food every day. What do you do when so many things are missing in your life? You concentrate on what you do have.

Countries that find their economy at a good level, always find a way to help the ones in need, courtesy of humanitarian organisations and fare governments. It is the care with the One Laptop Per Child  program, aiming to provide each child with a rugged, low-cost, low-power, connected laptop. Through donations to the program, Motorola Xoom tablets have been offered to kids in developing countries. And to demonstrate the potential of these children, it has been found that they possess the ability to learn very fast and adapt to the trends of technology.

In only five months since they got their hands on the device, they managed to hack it and exploit it’s full potential. It is an amazing performance from these children that lack food and proper shelter. OLPC founder Nicholas Negroponte took the opportunity to explain:

“We left the boxes in the village. Closed. Taped shut. No instruction, no human being. I thought, the kids will play with the boxes! Within four minutes, one kid not only opened the box, but found the on/off switch. He’d never seen an on/off switch. He powered it up. Within five days, they were using 47 apps per child per day. Within two weeks, they were singing ABC songs [in English] in the village. And within five months, they had hacked Android. Some idiot in our organization or in the Media Lab had disabled the camera! And they figured out it had a camera, and they hacked Android.”

We are offering this awesome tower defense title for iOS to...